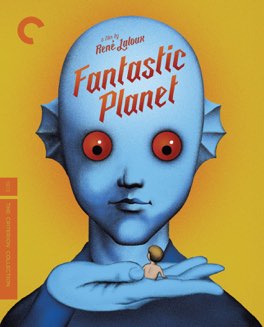 What a weird, trippy, wonderful film this is. From the soundtrack, to the animation style, to the story, it’s all just so great.

Ah allegory, my old friend. Unlike with Blood of a Poet, I find it very easy to explore things this film might be trying to say. There’s evidence for arguments about politics. Or gender. Or society, knowledge, and ecology. You could make a case for almost any of them, and it would likely make sense. In the end, what I found fascinating about the film wasn’t which of the ideas was “correct", but instead how the film enabled there to be so many of them in the first place.

The story is of a world where humans aren’t at the top of the food chain. Instead, we’re tiny pets for the giant blue Draags. They’re generally tolerant of humans, as long as they’re tame, but they fear the accelerated breeding of the wild ones. Periodically they exterminate all the humans they can find, as a means of population control. The film follows one man, born in the wild but quickly captured and raised as a pet. He escapes from captivity with the secrets of Draag knowledge, something that has the potential to change the hierarchy forever.

What’s so incredible about this film is how realized a world it creates, in its scant running time. It’s a fully formed alternate society, with its own intrinsic motivations, rules, and morality. Of all the arbitrary ways we judge film, length is perhaps my least favorite. Who decided that because something is longer, it’s better? What a silly notion that is. There are some long films that make great use of their running time, but so many are long just to be long. This film is 72 minutes, and packs more ideas in than films that are twice as long. - Dec 15th, 2016