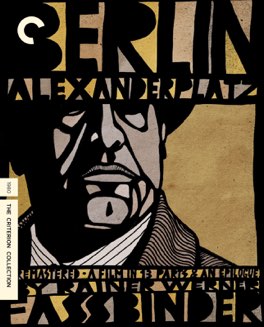 It’s blogathon time again around these parts, something which always leaves me with a good feeling. This time, it’s for the Beyond the Cover blogathon, hosted by Now Voyaging and Speakeasy. The theme is implicit in the name; to write about a film that was made as the adaptation of a piece of literature. I must have felt in need of some great challenge when I chose my topic, Rainer Werner Fassbinder’s fifteen-and-a-half hour version of Alfred Döblin’s Berlin Alexanderplatz. While I didn’t particularly enjoy the book, mainly due to the lack of a good translation, I did experience one of the more singular film experiences I’ve had in quite some time.

This is a film that is not only not widely beloved, it has throughout its history been severely maligned. It caused protests in Germany, when it was originally shown as a television miniseries. Audiences claimed they felt as though their television fees were being stolen from them, returned in an almost totally opaque film that demands heavily of its audience. I’ve also read criticism from many in the modern sphere of film writing, almost all of which has trended negatively. It’s not at all hard for me to understand why, even if I didn’t share in the loathing. This is an incredibly complex and difficult film firstly, and to add insult to injury, it’s absurdly long. Dedicating fifteen plus hours to anything is a commitment, all the more so when it’s something that offers as little help as this does. Still, I found it incredibly worthwhile and rewarding.

The film follows the book extremely closely, going as far as to include narration of specific passages of text. The story focuses on Franz Biberkopf, a rather simple and uncouth man, who has just been released from prison after serving four years for the manslaughter of his girlfriend. After first finding it incredibly difficult to accept his new freedom, he gets his head together, and decides to dedicate himself to not repeating the criminal enterprises of his past. He swears he will be an honest man, and he really does try to follow through on his goal. Unfortunately, he makes his attempt in late twenties Weimar Republic Germany, during the beginning of the great depression. Work is extremely hard to come by, and this, plus a series of unfortunate choices and incidents, leads him inexorably back down the road to ruin.

Along the way Franz befriends a man named Reinhold, who, unlike himself, is truly a bad guy. Unfortunately for Franz, he has an unexplainable love for this man, one that transcends all the terrible things he does. After ending up inadvertently on one of Reinhold’s criminal jobs, Franz provokes Reinhold into pushing him out of a moving vehicle, which causes him to lose an arm. Eventually his love leads to Franz forgiving Reinhold, and even joining his gang, breaking his promise to himself to go straight. Even with Franz’s forgiveness though, Reinhold still can’t get over his jealousy, which causes him to take the last thing Franz believes in away, and leads directly to Franz’s downfall, and finally, his utter resignation to his fate.

During the long process of watching this film, I spent a great deal of time trying to decide why I found myself almost rooting for these characters. By and large these are not super redeemable men. Reinhold is an absolute villain, a scummy disgusting man who never shows anything other than a willingness to do whatever it takes to get whatever he wants. Franz is better, or at least he’s more complex, but he is still a man who briefly wore a Swastika while selling the Nazi newspaper, beat one girlfriend to death, and beat other women he dated. He’s not exactly someone I would ordinarily invest myself in. And yet I found myself pulling for him, and feeling bad for him as things inevitably didn’t go his way.

The reasons for this are probably as complex as the film itself, but I do think a lot of it comes down to the performance of Günter Lamprecht as Franz, and to the love his character has for Reinhold. Lamprecht comes across as a lovably bumbling idiot, a man who intends to do the right thing at every turn, and yet somehow ends up constantly doing the absolute worst thing he can. His Franz isn’t a bad man, he’s an ordinary man who sometimes does bad things. Had Franz Biberkopf been played by someone unlikable, without Lamprecht’s weird charisma, I think I would have hated him, and probably also hated the film. His personal character won me over completely. By extension, his love for Reinhold made me love Reinhold a little bit, even as I was angry with him for all of the terrible things he did.

The film tells the simple story of this crass, sometimes violent, sometimes criminal, idiot man child, and through sheer love for the man involved raises the whole endeavor up. The film loves Franz, the people in the film love Franz, and while the story eventually destroys Franz, it does so in a way that kind of makes me love him too. This is an ordinary man living in a difficult time making the best choices he’s constitutionally capable of making. They are mostly bad choices, and sometimes they are truly reprehensible choices, but they are at least honest. This is certainly not a film I would recommend for everyone. It’s long, it’s fairly intense, there is graphic violence. Some basic interest in, or knowledge of, German, or the history of the country, would be very helpful. But for the right person, I think they could get as much out of it as I did. - Apr 11th, 2016