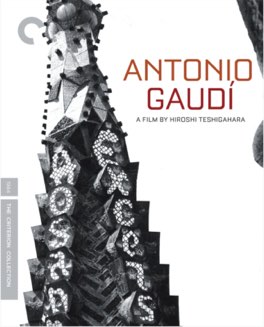 A fitting tribute to the incredible work of a deserving genius. The film brought me back to a time and place I loved.

I’ve spent exactly one week in Barcelona, which was more than enough time to fall madly in love with the place. In fact, it took all of fifteen minutes before I was lost completely. The city is an incredible place, seemingly made out of unicorns and magic. It has a vitality and vibrancy that’s hard to explain, but was so easy to pick up on. It’s one of my favorite places in the world, and so this film is something I’ve been looking forward to for quite some time.

The film is, as Criterion describes it, more of a visual poem than anything else. It’s a rumination on the work of the most famous architect in Catalan history, the titular Antoni Gaudí. There are almost no words, and no typical narrative progression. Instead, this is a film that simply tries its best to immerse the viewer in what Gaudí’s art and architecture feel like. Most of the film is spent reveling in intimate details of the various houses, parks, and other things he built. It’s not about the when, or what, or even how of it all. Instead it’s simply about being there, and taking it all in. It’s utterly unlike any other documentary I’ve ever seen.

I cannot tell you what it would be like to watch this film without having experienced the work of Gaudí. I can’t tell you if this is a good way to showcase his art. I can tell you, for someone who was already entranced by it, this inspired in me exactly the mood I felt when I was there. That sense of mystery, and magic, that pervades my memories of Barcelona was back in an instant. I felt the same sense of being underwater in a magical land, surrounded by things that seemed both real and fantastical, all at the same time. If the purpose of art is to invoke feeling, this succeeded for me massively. - Nov 3rd, 2016