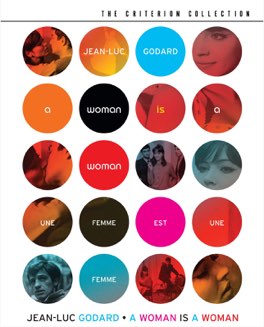 As beautiful and sixties-cool a film as I’ve seen in ages. The fashion is amazing, the story is fun. This is a great film.

A Woman is a Woman

I think, in some ways, I am a person with a similar nature to Jean-Luc Godard. Certainly we share a kind of melancholy hopefulness. A detached nature, that longs for connection, but can also push it away. Perhaps that’s why he’s the director I would most credit with opening my eyes to the power of the history of world cinema. It may be cliché, but Breathless absolutely changed my life. It showed me a world of art I had no idea even existed. It showed me there was art in the world I could relate to.

This film has a seemingly very simple story. Angéla is an exotic dancer who is madly in love with her boyfriend Émile. Émile is also madly in love with her. Angéla has decided she wants to have a child, which Émile doesn’t feel ready for. This causes the two of them to engage in endless argument. Émile’s friend Alfred has the hots for Angéla and isn’t shy about letting her know it. The three of them circle each other in a complex dance, mostly failing to really connect. Eventually decisions are made, lives are altered, and things conclude.

Godard made this film a neorealist musical, a fundamental contradiction in terms. A musical with almost no music, and almost no songs. Instead the characters often seem like they’re about to start singing. They never do though, and their dialog is in no way musical. It works as a deconstruction of the basic form. It evokes the feeling, by drawing on a lot of the individual elements, but without ever combining them into the whole. It’s absolutely brilliant. It plays with traditional cinema forms, rearranging them in fascinating new ways. What’s even more impressive, is it remains entertaining throughout, never over burdened by all its ideas. - Nov 5th, 2016