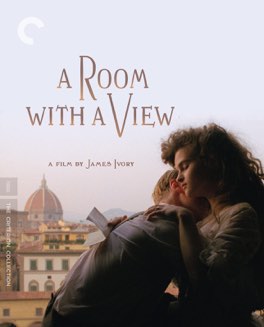 Watching this film is like being wrapped in a comfortable, if somewhat restricting blanket. You know you’ll have to get out eventually, but while you’re there it’s all just so pleasant.

A Room with a View

There’s a feeling in these Merchant Ivory adaptations of E.M. Forster novels, one I absolutely love. This film is not all that structurally similar to the last one I saw, Howards End. There is some thematic overlap, but mainly there’s a sense of peacefulness in the chaos I really appreciate. These are languidly complex films. The dialog is quick witted, but nothing moves much. There’s a feeling of a lot happening, but not much actually is. The comedy comes from the inherent absurdity of Victorian propriety, but the overall feeling is of an idle upper class.

This film follows a pivotal period in the life of Lucy Honeychurch, an upper class young English lady. As the film begins she is on a holiday in Italy with her older cousin, where she meets a young English man who challenges her upbringing. After a kissing incident, she is shuttled back home, where she is soon proposed to by a very different sort of man. The rest of the film involves her engagement, as well as fallout of the father of the young man she met in Italy moving to her little village. Of course there’s also all the usual Forster drama, and a ton of minor characters to enjoy. Honestly, these little bits of life, that aren’t really related to the main plot, are some of my favorite parts.

The film has its issues, of course. The nature of Lucy’s romantic life is one of men deciding things for her. She effectively spends the film choosing between two forms of non-self-determination. The class struggle is completely invisible, with a focus solely on those of serious means. It’s incredibly not diverse, in almost every way imaginable. I recognize all of that, and take issue with it. It’s just so unadulteratedly enjoyable to watch. I smiled throughout almost the entire film. This is a trifle of a thing, overflowing with its own self-importance. Sometimes that’s exactly what I want. - Dec 17th, 2016