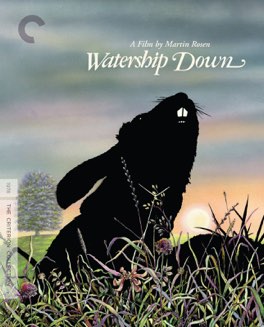 An absolutely heartbreakingly wonderful film. This completely overwhelmed and destroyed me. I loved it.

I should start by admitting that I don’t have children. If I did, perhaps I would feel differently about whether or not this is an appropriate film for them. As it stands however, childless as I am, I think this is a phenomenal film for people of all ages, and especially for children. I have heard it referred to many times as “not a kids movie,” and I disagree with that statement. I think what we mean when we say that about something like this is that it’s too mature for kids. In this case though, I think there’s a lot of value for children to find here, and a ton of room for them to grow up with this film in really interesting ways.

The film follows the story of a group of anthropomorphized rabbits, who flee their warren when one of them has a vision of its impending destruction. As it turns out he’s right, the land is about to be pulverized for use as a new condominium project. The rabbits spend most of the film searching for a new home, someplace where they can live without fear. Along the way we see their relationships with other animals, and with humans as well. They are forced to deal with various predators who want to kill them, farmers who want to chase them off their land or put them in captivity, and other rabbits who have different ideas about self-governance.

It’s a film full of complex metaphors, but it’s also full of an incredible perspective on the realities of life, and, more importantly, death. It doesn’t shy away, at all, from showing the real world dangers of being a rabbit on the run. Rabbits die in this film, and not in an off-screen manner either. Rabbits are killed, they are bloodied, they are trapped, and they die. The dangers of their world are openly discussed, as is their need for species-continuing procreation. It’s these things that some adults point to as a reason to avoid having kids watch this film, and I think that’s a mistake.

The film shows us these things, but not in any kind of gratuitous way. There’s no fetishization of violence or sex. It’s simply the reality of life for these rabbits, and what they have to go through as part of their quest for personal and group survival. This is therefore a wonderful way to explain some of these concepts to children.Do I think that some kids might be disturbed by some of this? Yes, I definitely do. But I would hope that it would lead to a discussion between parent and child about these facts of life. Death is eventually coming for us all, it’s not a bad thing for children to understand that. This film has such a wonderfully sweet and sad wisdom to impart.

It’s also full of those metaphors I mentioned. There are allusions to liberty versus Fascism, as well as spirituality, and our relationship to the environment. A lot of this stuff will fly over the head of a child. But, as they grow older, and continue to watch this film out of their own nostalgia, I would hope they would discover a lot of the truths being subtly imparted. This is a deep film, with many layers to unravel. So much of my favorite childhood art is like this, fun for obvious reasons to my childhood self, but containing wisdom of a subtler nature, waiting to be discovered as I got older. I don’t have children yet, but when I do I hope I can show them this film. I’ll be prepared to have to answer some very tough questions afterwards. - Dec 20th, 2015