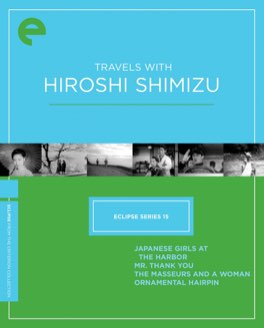 An absolutely marvelous set that I will treasure being able to return to. These are deep films, with much to discover through additional viewing.

Hiroshi Shimizu directed over 160 films during a 35 year career. He was a contemporary, colleague, and friend of the great Yasujiro Ozu, and while relatively well known in his time, he has been mostly lost to modern cinema history. That’s a real shame, as the vast majority of his films are now considered to be irrevocably lost. What we do have shows a master of pace, of layered meaning, and of a willingness to shoot on location during an era that was mostly indoors. The films in this set are uniformly humane and lovely, and provide a fascinating look into this point in Japanese history, from a perspective that focuses almost entirely on the people, instead of world events.

The only silent film in this collection, this was a surprisingly sweet take on the “fallen woman” trope. It traces the long and complicated friendship of Sunako and Dora, and the man they both love, Henry. Sunako is the one who falls from grace in the film, after an early incident where she enacts revenge on an unwitting romantic rival for Henry. The rest of the film follows her as she moves from place to place, ultimately becoming a Geisha, and eventually ending up back in Dora and Henry’s lives. The story isn’t particularly impressive, but it’s told with a visual style, and a sympathy for its protagonist, that I really enjoyed.

I think what I found the most interesting about this film, though, was the way it presented the contemporary society of its time. The film takes place at a particularly interesting moment, somewhere in the middle of a transition from a purely old world Japanese culture to a more Western inspired one. We see women in traditional kimono intermingling on the street with women in the same sort of 30s clothes you would see in a Hollywood film. This statement on the changing nature of society, with some of the characters having Western names, and all the characters attending a Christian school, is fascinating. This was a great way to start off this set. This is one I’ve been excited about for quite some time, and so far I’m not at all disappointed.

I’m not sure that a film as unambitious as this one could get made today, which is a real shame as this is one of the most delightful films I’ve seen in ages. There’s something magical about a just allowing a story like this to breathe, without forcing it to have more gravity than it requires. It’s a small film, subtle and full of significance that is easily missed. The story is extremely simple; the film follows one bus ride from the mountains of the Izu peninsula to the big city of Tokyo. The title comes from the driver of the bus, who gets his name from his practice of saying a firm “Thank You” to everyone who moves out of the way as he passes them on his route.

The bus is filled with a diverse group of people that reflect little insights into this period in Japanese history. There’s a salesman wearing a fake mustache to hide from his past customers, a variety of simple villagers on their way to weddings and funerals, a modern sort of empowered woman, and a mother and her daughter, who are traveling to Tokyo so that the daughter can be sold to work in a brothel. Along the way various moments show the prevailing attitudes and morays of the people of this time. The characters lightheartedly bicker, and there’s quite a bit of humor. As I said, the whole thing is small and intimate, but never boring. It’s a wonderful tale that left me with a smile on my face.

There is one additional moment in particular that I’d like to call out though. Part of Mr. Thank You’s charm is that he stops the bus often to talk with locals along the route. He’s constantly passing messages or agreeing to pick up supplies in Tokyo. One of these stops is absolutely heartbreaking, when we see the goodbye between Mr. Thank You and a young itinerant worker who is moving to her next job. She has helped build the road the bus is driving on, and she laments that she thought someday she’d get to ride the route she helped make possible. Mr. Thank You offers her a free ride but she declines, preferring to stay with her co-workers. What I didn’t know while watching is that the woman is Korean, and she stays with her friends to avoid the prejudice of the Japanese riders of the bus. This was a provocative statement for Shimizu to make in this era, and in fact a longer version of this sequence was censored by the Japanese film authorities.

Again we get a film that I’m sad to say I don’t think exists anymore. I’m not sure why we can’t have pleasant and lyrical works like this, but we certainly don’t seem to. This is an expert thesis in indirection, a meandering story that flows like a network of rivers might. It’s a trifle really, but it’s so wonderfully presented. It’s like a really simple piece of some candy that’s perfectly, delicately, balanced. You eat it and a smile crosses your face, and while you know you haven’t ingested anything substantial, you’re happy nonetheless. This film left me with a sigh and a smile in my heart.

So, what’s this simple and lovely film about then? It follows the lives of an assorted cast of characters staying at a collection of spas.Initially we meet two blind masseurs, who deal with the indignity of being blind in this period of Japanese history by asserting themselves in whatever ways they can. We also meet a mysterious lady from Tokyo, a man and his nephew, and an even more mysterious thief who is robbing guests at the various inns. These characters intersect, and quite a few interesting teases of plots begin to develop. However, much like real life, nothing really comes from much of these. Instead we see these people cross into, and out of, each others lives. Ultimately we’re left basically where we began. Like so many of the slice of life films that I love, this isn’t about the what, it’s about the feel of it.

I think what I’ve ultimately concluded, now that I’ve reached the end of this magnificent collection, is that what I love about Shimizu’s films is the incredible layering he achieved. Each of these films seems somewhat insubstantial upon first glance, and yet there’s a ton of additional value to be found if you dive a little bit deeper. This film in particular is deceptively charming; it uses that charm to cast the viewer’s attention away from the pretty serious things that are happening throughout the story.

That story also takes place at a country inn. In this case though, the focus isn’t on the blind masseurs, but rather on a collection of travelers from Tokyo who are spending their summer relaxing here. One of those travelers, a soldier named Nanmura, pierces his foot on the titular hairpin while soaking in the hot spring. Eventually the owner of the pin, a Geisha from Tokyo named Emi Ota, returns to the inn to apologize for injuring the man. This leads to the most ephemeral and innocent love story I can remember seeing on film, and ultimately a larger message about the uncertain nature of our life choices.

This was the funniest of the four films, featuring many moments of laugh out loud humor. It was also ridiculously pleasant and fun. But both that comedy and that sweetness are in service of a larger message. The message for all the characters here is that there is a choice to be made about what you want from life, and you will probably have to make that choice without knowing for sure what happens next. You may trade a short period of happiness for a longer period of uncertainty, and that’s ok, but you need to go into that choice with your eyes wide open. A daydream can be incredibly pleasant, and it might make sense to live in one for as long as you can, but you also might end up back in reality. It was an unbelievable film to close out what was really an incredible experience. - Nov 22nd, 2015