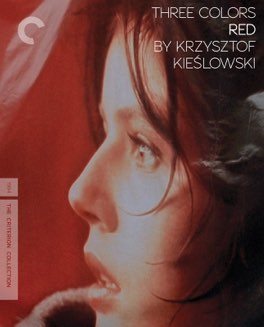 A fitting end to what has been an absolutely marvelous experience. In these films I found one masterpiece and two incredible companions. I’m already looking forward to returning to these wonderful films.

If Blue was about a liberty opposed to connection, and White was about an equality through inequality, than this film is about a fraternity which can only be seen by nonexistent outside observers. This film has been called an anti-romance, which I think is a very accurate description. It’s a romance of connection and understanding, rather than of love and physicality. No one is successfully engaged in anything like romantic love in this film, but nevertheless there’s a lot of romantic things happening. Instead of specific people, the romance is found in synchronicity, and also in discovering a path you could take, if circumstances were different than they are.

The film takes place almost entirely in Geneva, where young model Valentine is dealing with her unreasonably jealous and distant boyfriend. One night she accidentally runs over a dog, and takes her to the vet. In doing so she begins a dialogue, and eventually a friendship, with the dog’s owner, a retired judge who lives up the hill. The judge has the bad habit of listening in on his neighbors phone calls, something that Valentine finds abhorrent. But together they begin to understand one another, and eventually develop a strange, almost romantic, bond. At the same time, another neighbor of hers, Auguste, is living his life in eerily similar paths to Valentine. He’s about to become a judge himself, involved in his own failing relationship, and appears to be perfect for Valentine, but they never seem to meet. They are constantly crossing each other’s paths, but completely unaware of each other’s existence.

This synchronicity, or events that appear related but have no discernible mutual cause, is only apparent to me, the viewer of the film. Valentine and Auguste have absolutely no idea that they continue to dog each other’s steps. This is the fraternity of the theme, a kind of community made up only in hidden resemblances and patterns. A community which is created by me, as I watch the film itself, similar to the idea in quantum mechanics of perception as a reality change factor. By watching the film, and spotting the obvious patterns within, I am bringing Valentine and Auguste together in some fashion. It’s a fascinating thought, and an ambitious one, even when coming after the big ideas of the two previous films.

The romance comes partially from this connection through coincidence as well. There are many small moments in the film where Valentine and Auguste share some sort of interaction that neither of them are aware of, but which creates for the audience a nice romantic moment. One such event occurs when Valentine goes to the same record store where Auguste is shopping with his girlfriend. It turns out they are listening to the same classical composer, and when Valentine goes to buy the CD the last copy has already been purchased by Auguste. This connection in time and space, completely oblivious to the characters themselves, reinforced the idea that these people were meant to eventually be together.

The other romance of the film is a somewhat more direct one, if not particularly less complex. It’s between Valentine and the retired judge she catches spying on his neighbors. At first she finds him disgusting; she tells him bluntly that she pities him. But, as they get to know each other better, she finds herself drawn to him, and vice-versa. They find in each other a kind of disconnected reflection; an idea of what life could have been for the judge, or someday could be for Valentine. There’s no sense that anything would ever happen between them, but more they create a romance of possibilities that exist only in the idea of a time appropriate version of the other person. If Valentine was a little bit older perhaps, and the judge a little bit younger. This romance, which is full of tender moments, is a completely different kind than I’ve seen on film before. - Aug 22nd, 2015