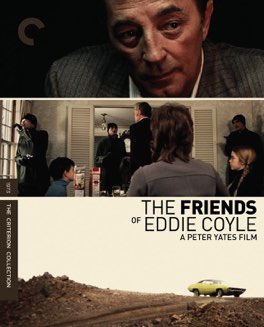 An incredibly sparse film, and one that draws power from that sparseness. It somehow manages to be both completely of its time, and timeless as well.

The Friends of Eddie Coyle

There have been many gangster films made in the history of cinema. It’s a genre that has remained extraordinarily popular since Underworld got things rolling in the late 1920s. It’s also a genre I absolutely love, with all of its little clichés and touches, that I’ve grown accustomed to over the years. What was so impressive about this film was that it almost totally avoided all of them. As a result, I’ve never seen a gangster film like this one before. It’s a melancholy affair, but it never devolves into being depressing. It’s as devoid of ornamentation as I can remember a film being, and it tells its story with a directness of purpose that’s admirable and somewhat shocking. It’s a remarkable film.

The film follows the later stages of the story of the eponymous Eddie Coyle. He’s a small time hood who is finding himself at an age where he no longer wants to accept the consequences created by his life choices. He’s facing a prison sentence for a failed smuggling job, he’s already done time before, and he doesn’t think he can do it again. The film follows his attempts to simultaneously free himself from his fate, and also to somehow find enough money to retire. This mostly amounts to conversations with his local policeman, who might agree, if Eddie does enough snitching, to help get him out of his sentence. And on the money side, he’s acting as a go-between for some bank robbers and a young gun runner who is providing them with their munitions.

There is an almost nihilistic attitude to the low level hoods, gun runners, and mob stooges that make up the cast of characters in this film. A nihilism that exists as an internal war between believing that if they somehow play their cards just right they can make something of themselves, and the stark realization that basically nothing they do affects their fate at all. Everyone we meet in this film has already had the end of their story written, and they’re slowly, or in some cases not so slowly, barreling towards it. Nothing remains to be done that is likely to substantively make a difference in the outcome.

What I found interesting was the spectrum that these characters exist on, inbetween these two points. Eddie is clearly representative of the far end of acceptance. Which is to say, he’s still fighting for a way out, but with a seeming understanding that he’s unlikely to win. His is a resignation, while at the same time an all out struggle. It’s as though he’s completely compartmentalized his life, and it’s a fascinating thing to see. The young gun runner is our representative for the other point. He’s still got much of his belief, if only in himself. He’s still projecting an aura of invincibility, as though he has it all figured out. At the same time, he’s clearly seriously paranoid, well aware that he’s playing a very high stakes game, and that one misstep will mean total ruination. All the rest of the characters exist somewhere inbetween.

The Friends of Eddie Coyle is therefore an absolutely perfect title. It’s a genius stroke of beautiful subtlety. In this world, trapped between these extremes, how can there possibly be real friendship? With everyone internally acknowledging the probability of their doom, they are by necessity an island of personal hope and despair. How can anyone trust or believe in anyone else? They all exist at different states of their shared machine, and the machine is going to produce its product regardless of what they do. They might believe they can adjust the vector of their fate, and therefore alter its course, but it’s mostly far too late for that. And so they circle each other like sharks, and socialize in their own way, but only as wary combatants in a struggle to find an exit. It’s not a particularly happy theme, but it made for an incredibly moving film. - Aug 27th, 2015