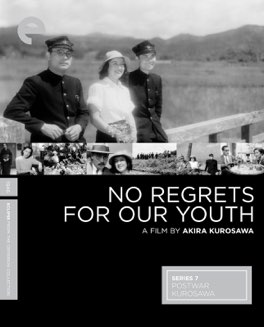 A beautiful and sad story about the price of freedom. I’m so excited to see where this set leads.

No Regrets for Our Youth

This film was Akira Kurosawa’s first to be made after the end of World War II. The censorship rules Japanese filmmakers had lived under throughout that period were now gone, and it opened up an avenue to critique what he had just lived through. This is a film, about WWII, made without any distance from the events it recounts. Specifically it’s based on the true story of the Takigawa incident, where the Ministry of Education in wartime Japan fired a professor for what he was teaching, leading to student protests and riots over the issue of academic freedom. The film doesn’t dwell much on the actual incident, it really just uses it as a springboard to talk about what was going on in Japan during that time.

This is also Kurosawa’s only film to feature a female protagonist, in the role of Yukie, the daughter of the fired professor. The film chronicles her journey from spoiled child to social activist, and it’s unbelievably intense. This is a serious film, which connects it to the equally serious Samurai films of Kurosawa, which were my only previous encounters with the director. This is a serious film, but in all other ways could not be more different from those epics.This is an intensely personal story of one woman, chronicling the various triumphs and sadness she experiences through the war years. The film moved me greately, with it’s examinatiom of the idea that you must expect great sacrifice in the struggle for freedom. That’s an idea that is so often overlooked, and it was amazing to see it examined here. - Feb 22nd, 2015