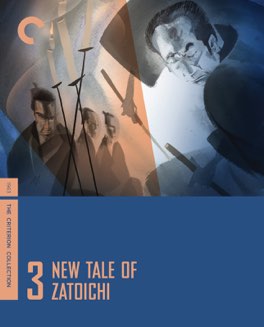 Another compelling entry in what is shaping up to be a truly monumental collection of films. This one was slightly harder to follow than the previous two, but I still greatly enjoyed it.

The third film in the Zatoichi series is just as humane as the first two entries, and almost as enjoyable. The plot is somewhat more convoluted, but the sense of impending tragedy, and the almost Sisyphean nature of Ichi’s search for peace and prosperity, remain firmly intact. It was the first film in the series in color, and it uses its newly expanded palette beautifully. Shintaro Katsu continues to bring an unbelievable weight to a role that, on its face, is completely ridiculous. Ichi is essentially a superhero, but with Katsu’s incredible performances he really feels vulnerable much of the time. It’s a fairly staggering achievement, and it raises what would otherwise be a pure genre exercise to real artistic heights.

The story in this installment is, as I said, somewhat more convoluted than the previous films. As we start, Ichi is heading back to his home town, four years after he left to join the Yakuza. He is waylaid by the younger brother of someone named Kanbei, that he supposedly killed in the previous film, although I’m afraid I couldn’t remember who that was. He also runs into a childhood friend of his who is now a traveling musician, and saves his friend and an inn full of travelers from a roving band of robbers. At some point he is about to fight the brother of the man he previously killed, when he is interrupted and saved by his former Sensei, Banno, the man who taught him to use a sword.

He heads back to Banno’s house, where he is also reunited with Yayoi, Banno’s eighteen year old younger sister, who is being pushed to marry a man she doesn’t love. She quickly falls for Ichi, and proposes marriage, an idea he embraces once he realizes that she’s serious. Banno has fallen on harder economic times, and has become involved in some shady business with a gang of robbers, a fact he is intensely trying to keep from both his sister and Ichi. The plot revolves around these various characters and situations, with everything coming to a head when a student from Banno’s school is kidnapped by unknown assailants. Ichi is forced to make some very difficult choices, and once again is faced with the possible ruination of a chance at actual happiness, owing to his past as a gambler and a Yakuza.

The plot was confusing at times, but this was an absolutely lovely film. I’m still overwhelmed with how humane, and almost anti-violence, this series is. Ichi definitely draws his sword, and each film has so far ended with a battle, but he doesn’t fight for fun ever. He only resorts to violence when absolutely all other possibilities have been exhausted, and the most intense moments in this film have to do with his choosing not to fight. There is a definite message here; the bad guys are the ones who are quick to solve their problems with violence, while Ichi would prefer to live a quiet and peaceful life somewhere. I remain captivated by this series of films, and I can’t wait to watch the next one. - Feb 16th, 2015