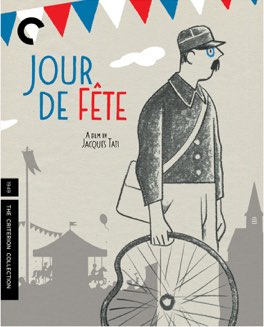 A delightfully sweet, and funny film, and one that never takes itself too seriously. It’s full of the usual Tati charm and joy, and it clearly shows the master, warming up his skills.

A Jacques Tati film is like a nice Sorbet; it’s not overwhelming and it doesn’t demand anything from you. It’s a wonderful treat, sweet and clearly made completely with love. These are not films that want to challenge your ideas about cinema, or about anything really, but would rather just put a smile on your face. And they achieve that goal masterfully. This one in particular, his first feature length film, is just absolutely lovely. It’s a smaller film than the others I’ve seen, and at a slower pace, but it’s bursting with the kind of wonderful gags, and thoughtful humor, he’s known for.

As I mentioned, this film was his first, and it came before he’d created his recognizable role of Monsieur Hulot. That character, which many have called a French version of Charlie Chaplin’s famous Little Tramp, showed up in Tati’s next film, M. Hulot’s Holiday. What we get here instead is a charming postman named Francois, also played by Tati, and with some of the same mannerisms. Francois talks far more than Monsieur Hulot, and is perhaps somewhat less lovingly bumbling, but he still managed to quickly win me over. This film also features a lot more verbal humor than I’m used to from its director, but it’s all to very nice effect.

The story, as much as it has one, this is still a Tati film after all, begins with the arrival of a traveling fair. It was nice to see a young Guy Decomble as one of the members of the troop, I loved him as the inspector in Jean-Pierre Melville’s Bob le flambeur. Misadventure abounds as Decomble and his partners begin to set up for their carnival, and eventually we’re introduced to Francois, our main character. He’s one of the local postmen in this charming village, and he’s clearly extremely impressed with both himself and his job. Immediately the carnies notice this and begin to have some fun by playing with his ego. They get him to help them erect a pole, and, later on, trick him into getting rip-roaring drunk.

The rest of the film follows Francois’ deeds as he works his way through his postal route. He gets drunk, breaks his bike, destroys the mail of his unlucky customers, and generally makes a fool of himself. But, as in all Tati films, you can never get angry with Francois, or turn on him. There’s something that’s completely lovable about him, even as he’s blundering from one screwup to another. He’s just so delightfully genuine and well meaning, that it’s hard to feel anything but pity and laughter for him. Tati was a master of putting himself through horrendous abuse to win over the audience, and he succeeds wildly in this film. Especially amusing is an insane film strip Francois watches about the supposed exploits of American super-postmen, and his attempts to copy it afterwards. It’s so absurd and it made me laugh multiple times.

The bulk of Tati’s work concerned his distaste for the modern world, and of our over reliance on technology to solve our problems. Certainly Trafic focuses heavily on that theme, as does his masterpiece PlayTime. This film, however, doesn’t quite fit into that same mold, at least to my eyes. Certainly there is some technology here, the baker’s delivery boy rides a motorcycle instead of Francois’ humble bicycle, and the American military police sort of bumble around in a jeep. But the main focus of this film seems to be on the colorful characters of this small town we’ve been transported to. You can kind of see the initial blossoming of some of the later focus, in small moments here and there, but for the most part this isn’t a film that has any kind of big message to convey, it’s just here to entertain.

There’s something fascinating to me about the work of Tati, as it relates to the time period he existed in. His comedy, so dependent on physical humor, is almost classically silent film comedy. No less an authority than Buster Keaton repeatedly claimed that Tati had been the only sound director he knew who carried on the true traditions of silent cinema. You can see it in almost everything Tati does. This film, for example, has more dialogue than maybe any other of his films that I can remember, but it’s still nothing that couldn’t absolutely be conveyed with interstitials. The film itself, or more importantly, the story itself, doesn’t require words to be understood. I think I could watch this film without the subtitles, and still enjoy it just about as much as I do now. It’s really quite a feat, and I love watching it play out.

The story, as I said above, is eminently not important to the enjoyment of this film. This is a trifle, a delight intended to fill our hearts with smiles, and leave us slightly happier than we were before we started watching it. To that end this film achieves its aims completely. It’s not as monumental an effort as, say, PlayTime, but it’s still a fun film that’s more than worth watching. I imagine myself putting this one on the next time I’ve had a crappy day, and just want to forget my troubles and enjoy something lighthearted. It’s guaranteed to take me out of whatever is going on in my life for awhile, sometimes you just don’t need anything more than that. - Feb 11th, 2015