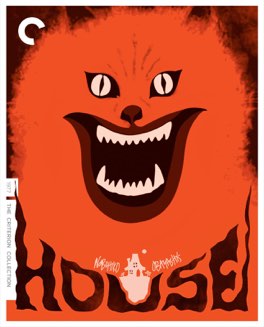 One of the strangest, and most enjoyable, films I’ve ever seen. Full of insane visuals, and an almost totally nonsensical story. I loved the entire thing.

I strongly suspect that this film is of the type where you either love it, or you hate it. It’s so over-the-top ridiculous that you’re either going to be gasping with delighted surprise, or rolling your eyes as you can’t believe the nonsense in front of you. Personally, I’m in the first group, and I’m grateful that I am. I would hate to be such a boring, and uncreative enough person, where I couldn’t enjoy something as campy and wonderful as this film.

I’m not sure how to even begin talking about it, because it’s definitely one of the weirdest things I’ve ever seen. Like a feverish dream from the mind of a demented and tortured child. Which, to some extent, the mind of a child part anyway, it is; much of the story came from the eleven-year-old daughter of director Nobuhiko Obayashi. I can just imagine her telling her filmmaking father all the insane things she wanted in this film, and her delight when he made them real for her.

The story starts with a fairly typical horror film premise, although even at the beginning there are many hints that something else is going on here. The film follows seven friends, who are all named after their most obvious trait. Gorgeous, Fantasy, Melody, Mac (for stomach, she likes to eat), Sweet, Prof, and Kung-Fu are all about to leave for their summer vacation from school. Gorgeous is supposed to go with her beloved father to a fancy vacation town, but at the last moment he tells her that they will be joined by his new Fiancé. Feeling angry that her father is moving on, Gorgeous decides to go visit the house of her dead mother’s sister, and brings her friends along with her.

On a visually fascinating train ride to the house, Gorgeous tells her friends her aunt’s tragic story. Growing up during the period right before World War II, a “long, long, time ago” according to the girls, her aunt was in love with an extremely handsome and faithful young man. They were engaged to be married and it looked like her life would end up happily ever after. Unfortunately, he was drafted to fight in the army, but he promised her that he would return for her someday. He was killed flying a fighter pilot during the war, but her aunt remained faithful to him, continuing to wait at her house for him to someday return. This part of the story is told as a silent film, including interstitials which the girls argue about the translation to, it’s so great.

From there the story moves into a fairly typical horror pattern of there being something very, very wrong at the aunt’s house. It could be just another House on Haunted Hill, or some other, more traditional, horror film, except for the insane things that happen in the house. I don’t want to ruin a single moment of this film for anyone, so I’ll just say that the things that happen are extremely weird. The film isn’t even slightly scary, it’s far too campy and ridiculous for that, so instead what we get are just unbelievable moments of pure craziness.

From the very beginning, the film makes liberal use of extremely odd choices. The early part of the story is framed almost like a parody of a romantic teenage girl soap opera, like a Japanese Sweet Valley High music video. The girls, with their stereotype personalities that they don’t ever deviate from at all. The future stepmother of Gorgeous, who has a constant wind that blows her scarves around in the most absurd way possible. The bumbling antics of their beloved teacher Mr. Togo. It’s laugh out loud amusing. It’s so light and airy that it’s a real initial shock when the tone changes to dramatically at the aunt’s house.

I can’t tell if Obayashi is messing with me or not. The film might be an absolutely brilliant work of pointed satire, puncturing the tropes of silly teenage melodrama and campy slasher horror. Or, the film might just be an absolute trainwreck, made by a director who had no idea what he was doing. It so perfectly straddles the line between intentional sincerity and intentional parody. But, to be honest, I don’t really care if Obayashi meant to make me laugh and gasp or not, because he definitely succeeded. The whole thing is just so unrelentingly silly and awesome, that it really doesn’t make any difference as to the why. It’s not really a why type of film anyway; the story has a vague point to be sure, but that’s definitely not the draw here.

What we get instead of a deep and meaningful story is some of the best visual insanity I’ve ever seen. There are so many moments in this film where I said, out loud and by myself, “what?!?” I couldn’t believe some of the things that happened. From the incredibly inventive ends that the seven girls meet, to the crazy visions Fantasy has, to one of the best uses of a cat in any film I can remember seeing. There are just so many ideas here, it’s like Obayashi and his daughter simply opened up their heads and let it all pour out. Which, now that I think of it, would have been a visual that would have fit right in with the rest of the film.

It’s definitely a bit of a ramshackle film; the story is all over the place and the effects are hilariously out of date in many cases. But none of that matters, it’s like a love letter to weird and I was absolutely riveted. I don’t remember the last time I saw a film this bursting with interesting things, or full of as many moments that made me laugh out loud with delight. It’s exactly the kind of weird film that when you discover you feel as though you’ve found a secret treasure. I cannot wait to show this to people and watch as their faces drop and they stare at me with a “I can’t believe that just happened” look. What an unbelievably fun film. - Jan 11th, 2015