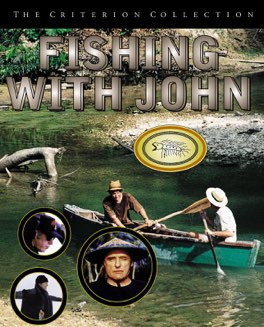 A surprisingly charming and lovable show, it manages to somehow make watching fishing entertaining. Ultimately, the plot is a bit aimless, but this was still a treat to rewatch.

The first time I saw this show was around 15 years ago. I was absolutely captivated then and I’m still greatly amused now. The idea of John Lurie, actor in films like Stranger than Paradise and Down by Law, getting a Japanese production company to fund surreal fishing trips with his friends, is just too amazing not to enjoy. The show features little actual fishing; rather it’s generally made up of a bunch of odd sequences barely held together with some truly goofy narration. This first episode features the director Jim Jarmush, whose films I’m generally a fan of. John and Jim go shark fishing in Montauk and the entire thing is hilariously pointless. I’m very much looking forward to the rest of these.

This episode is a little bit less organized than the first, but still very enjoyable. Tom Waits supposedly hated making it badly enough that he didn’t speak to Lurie for several years after the trip, and you can kind of tell from his on-screen attitude. He gets queasy the first day out, doesn’t seem to appreciate fishing all that much, and really doesn’t like the row boat and hike that they take to get in and out. At the end of the episode he berates Lurie for having talked him into it at all. It’s especially interesting because it’s the jungle nature he seems to hate the most, and it was his vacation to Jamaica that moved the filming location from the original plan of Arkansas. Still, the episode has the same irreverent repartee that characterized the previous outing. They also actually catch some fish this time, which is novel.

According to Lurie, Matt Dillon wasn’t his first choice as guest for this episode. Apparently, he wanted to take Flea from the Red Hot Chilli Peppers, but his Japanese production company insisted on Dillon. Lurie had never met Dillon and they don’t really get along much at all. They barely talk, and Dillon seems to be grumpy and uninvolved when they do. So little usable footage was created that most of the episode is either entirely music, or made up of random clips strung together to try and create something coherent. Having said all that, however, the premise behind the episode’s ridiculous dances is funny, and while this is slight even by this set’s standards, it’s still an entertaining episode.

By far the best episode in this set, this one is just absolutely hilarious. Apparently ice fishing in Maine was Dafoe’s idea; he agreed to participate only if that was the location. They play up the cold aspect and portray their adventure as though they are seriously risking their lives in the pursuit of fishing. That plus Dafoe’s hilariously gruff and weird attitude make for an extremely enjoyable episode. The ending is probably the best moment in the entire series but I won’t ruin it here. Suffice it to say that the oddball nature of the narration hits a perfect climax point at the end of this episode. Lurie is also at his grumpiest here, and it bounces really nicely off of Dafoe’s insane optimism, and weirdly positive charm. When Waits was grumpy in the Jamaica episode it fell a bit flat because it came out of nowhere. Lurie being grumpy, on the other hand, makes perfect sense, because ice fishing looks like cold, hard, and trying work.

Early in this two-part episode, Dennis Hopper and John Lurie pull off near the road, and Hopper says that they could have done a location shot for Easy Rider right there. It’s an interesting moment to me, because these episodes confirm what that film already made me suspect. That is, that Hopper isn’t so much an actor as he is just a really interesting guy, who is really good at letting it show. The Hopper we get here is a lot like Billy in Easy Rider, brash, a bit annoying at times, funny, and really charismatic. He’s definitely the best thing about these episodes, the rest of it honestly just felt a bit forced. Like the first episode with Jarmush, they clearly invented the plot in the editing room, but here it’s a lot more obvious. The guys are supposedly on a search for the mythical giant squid, but it’s 100% told in the voiceover, and nothing in the footage itself relates to this story at all. There were definitely a few nice moments with Hopper and Lurie, but this was an unfortunate way to end this series. - Feb 18th, 2015