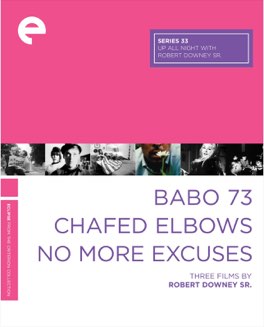 The craziness gets turned up a few more notches. While I didn’t enjoy it quite as much as the first one, this was still so much fun.

Wow, this one turned the craziness up quite a few notches.

No longer political satire, this is more just a series of almost free associated ideas, rather than any kind of conventional narrative.

Telling the “story” of a man experiencing his “typical November” and “typical January” breakdowns, we get a bunch of semi-connected vignettes about one guy’s crazy life.

He’s in an incestuous relationship with his mother, he gives birth to money, he’s killed and brought back from the gates of Heaven. In each case very little is explained, and we more or less wander freely through these stories.

This one was harder for me than the first, but I still enjoyed it, mostly because of the humor that Downey Sr. imbued each of the parts with. All of the women in the film are played by Downey’s then-wife Elsie, and she does an absolutely phenomenal job of selling all the insanity.

I’m really curious to see where the set goes from here, as I’ve been led to believe that future films are even less narratively coherent than this one. - Jul 18th, 2015