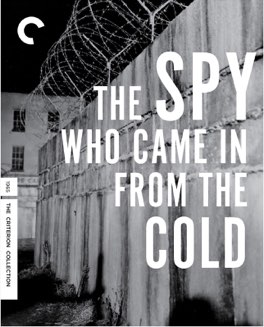 The Spy Who Came in from the Cold

This is a remarkable film. Based on the novel by John le Carré, it’s a sloooooow burn that manages to evoke more emotion with less action than almost any film I’ve ever seen. le Carré wrote the story in response to his dislike of the James Bond stories, which he thought provided a ridiculously oversimplified take on what Cold War espionage was all about. The film version is about as different from the Bond films as I can imagine, it’s powerful and serious and sober. It replaces blind patriotism and action heroics with serious points and thoughtful dialogue. It’s a truly phenomenal film.

The story starts as Alec Leamas, head of section operations for England in Berlin, waits at Checkpoint Charlie for one of his agents to defect from East Berlin. After seeing the man shot on his bicycle while trying to cross over, he is sent back to England to meet with his supervisor, Control. Control tells him that he needs him for another job, to “stay out in the cold,” although it isn’t immediately apparent what that job is. Leamas seems to be completely ruined, drinking heavily, barely working a job as an assistant librarian at a crackpot paranormal library, and dating his naive communist coworker. Eventually he beats his grocer in a drunken rage and is taken to jail. When he gets out we start to learn that all is not exactly as it seems and suddenly we’re in a completely different film, one about the complicated workings of international espionage and intrigue. I won’t spoil where the story goes from there, but let’s just say I had no idea where events would lead, even as I watched them unfold.

The filmmaking here is brilliant. The cinematography is so beautiful; so expressive with its stark black and white, in a way that no films made today can match. It provides the perfect backdrop for the bleak world view and experiences of the main character. He is a man who has seen exactly how pointless and arbitrary this fight is, and you can tell it just by the camera angles. You can also tell it through the wonderful performance of our lead, Richard Burton. He turns in a pitch-perfect performance, with exactly the right levels of sardonic wit and total despair. His character is wonderfully balanced by that of Claire Bloom’s Nan, his coworker and lover. Her sincere but naive desire for the organization of the Communist Party to bring peace makes her both endearing and foolish. We worry about her just as much as Leamas does. Also excellent is Oskar Werner as the second in command on the communist side, his conversations with Leamas are absolutely fascinating and much of the meat of the story is given to us in their dialogue.

The Cold War was almost totally pointless, we know that with the benefit of hindsight. Russia was barely able to feed themselves for most of this era, they were never a serious threat. The spread of Communism was a red herring that allowed bad people to do stupid things. It was a war fought in secret; one where billions of dollars and countless lives were lost in an absurd and terribly arbitrary conflict. We know that now, but to see a film make that same point 27 years before it ended, is extremely intense. The film is an important statement about the senselessness of war, and the arbitrary cruelty of humanity when engaged in espionage. As Leamas says in the film, the only rule is that of expediency. Choices are made, lives are lost, wrongs are committed, all so the average person continues to live their lives in almost total ignorance. Innocence and guilt are rendered meaningless, actions are taken out of simple perceived need. One day someone is your enemy, the next day your friend; information is the only currency. It’s an incredibly powerful point made shockingly well. This is an important film, and it’s one I’m really glad I got to see. - Jun 10th, 2014