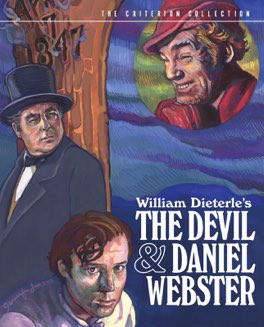 The Devil and Daniel Webster

One of the weirdest, and most random, Hollywood films I’ve ever seen. Highly entertaining, goofy beyond belief, and totally worth watching.

This film, with its silly and simple story, absurdly cartoonish characters and ridiculous situations, is nevertheless incredibly interesting and worthwhile, mostly due to a couple of truly impressive performances.

There are quite a few things that make this film so wonderfully fun. The aforementioned performances I’ll get to in a bit, but there are also some really weird and surreal moments that are somewhat astonishing, especially for the era in which this film was made.

This is, at times, a downright creepy film, and that’s something you just don’t see much from old Hollywood. It’s full of laugh-out-loud funny scenes and situations, and I couldn’t help but smile most of the way through. It’s just so damn weird, with all of its crazy twists and turns. It’s not a great film by any means, but I really liked it.

The story is, as I said, silly to the extreme. We start out with the Stone family, and particularly Jabez Stone, a down on his luck farmer for whom everything seems to be going wrong. His crops are failing, he owes a huge mortgage to the town loan shark, he can’t even manage to get his seed into a wagon to sell to keep the creditors at bay. But all that changes when the devil himself comes and offers him seven years of good fortune if he will relinquish his soul at the end of the deal.

He accepts, a bit too quickly really, and suddenly everything in his life turns around. He finds buried treasure in his barn, his crops are spared while his neighbors fail, he has a son, builds a new mansion, and so on. Eventually he rules the entire town with an iron fist, is shacked up with an unbelievably creepy but hot French maid, and sees first hand what will happen when the devil finally comes to collect.

Freaking out about his impending doom he “gets religion” and decides to come back to the side of good. Enlisting the help of his senator Daniel Webster, who is being played by an actor but is based on the real senator of the same name from Civil War era America, he attempts to get his soul back from the devil by means of a jury trial, made up entirely of the damned.

I’m not making any of that up, that’s the real plot of the film. It’s so absurd it’s hard to believe it ever got made. The story has a gee-shucks-golly feel to it that was very common in Hollywood films of this era, everyone is just so Christian and good, well except for the devil and, for most of the film, Jabez.

It’s so interesting to see how Americans viewed ourselves during this time period, so wholesome and well-meaning, a nation of farmers who were being tempted by evil, but wanted to do right. At the same time, there’s an absolutely fascinating moment where the devil, after being told by Daniel Webster that he’s not American, goes on a rant about how he was present during the first slaughtering of Native Americans, that he was on the first slave ship from the Congo, and other things like that.

It took me so by surprise, to see American history being painted negatively in an otherwise rah-rah America film. This film was made just before the start of American involvement in WWII, and right at the end of the great depression, and both events have a huge influence on the morals of the story.

The United States of America of this time period is a poor country, still reeling from the dark times of the previous twelve years, about to come into serious prosperity. It’s no stretch to say that the entire message of this film is to warn people about the dangers of financial success, of the changes it can make and the evil that can creep in.

It’s a serious message, to be sure, but it’s hilarious to see it presented this literally, with an actual devil and eternal damnation hanging in the bargain.

The devil is most of the reason this film is so worth watching. Walter Huston, who I absolutely loved in The Treasure of the Sierra Madre, turns in the greatest performance of Satan I have ever seen captured on film. He is phenomenal, the perfect combination of charm, wit, curiosity, creepiness, cleverness, and downright evil. He sparkles in every scene he’s in, gets all the best lines, and absolutely steals the show.

His devil is so understated, especially in comparison to the scenery chewing going on around him, making his excellence stand out even more. Every single time he showed up, I was on the edge of my seat, so overwhelmingly happy that he was back again. There is not a single moment with him wasted, he’s without a doubt the best thing about the film.

Edward Arnold is also great as Daniel Webster. From what I’ve read, his version of Mr. Webster bears almost no resemblance to the historical man himself, but he brings an awesome counterpoint to Huston’s devil. His Webster is a man of the people, an honest farmer trying his best through government to heal the country and save the poor.

He is a man who loves his country and an incredible orator. His scenes are almost as good as Huston’s and together they are the reason this film goes from simply being a failed and awesomely weird Hollywood experiment, to being something that I can heartily recommend everyone see at some point. - May 10th, 2014