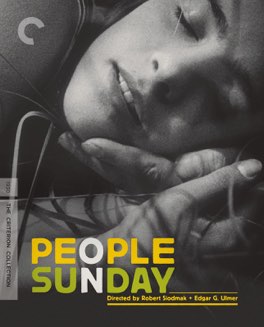 A fun trifle of a film that became much more relevant and serious based on when and where it was made. This film opened my eyes to a time period I had very superficial ideas about.

This was a lovely little film, more than a bit odd, but charming nonetheless. It’s both a relic from a very interesting period in history, as well as a surprising reminder to me of how little has changed about the interactions of young people in the last 80 years or so. The overall story was definitely lacking in any kind of real direction or heft, but, as I’ve discussed here before, I really enjoy slice of life type films. And, as someone who is very interested in history, and has a personal connection to the history of Germany, this was an extremely important document of the past.

It ended up offering more than that, however, and was full of small moments that made me smile. It was so abundantly clear that the filmmakers were overjoyed with finally being allowed the opportunity to create. The whole thing is bursting at the seams with their infectious energy and desire. Much like the French New Wave, this showed unbelievably talented people who are finally getting to tell their stories. Unsurprisingly, basically everyone who worked on this film went on to have an illustrious career in film. So, while this is definitely a minor work, it’s still one that I’m really glad I got to see.

The plot is very silly, much like other silent films I’ve seen. It seems like it was hard to convey a more serious story with the silent medium, but maybe I just haven’t stumbled upon those films yet. Anyway, this one starts with introductory text that explains that none of the characters here are being performed by actors, but rather that these are five real people the filmmakers found, who are playing themselves. It’s a very interesting conceit, and it adds to the documentary feel of the production. After the introduction we meet Wolfgang, a wine merchant, who happens to meet a young lady named Christl, who is a film extra. They have ice cream together and then setup a date for the following day, Sunday.

At the same time Erwin, a taxi driver, and his model girlfriend Annie, argue over pictures of celebrities in their apartment, and we find out that Erwin is friends with Wolfgang. Wolfgang invites both of them to come to the lake the next day with him and Christl, and they agree. The next day Annie decides to sleep in and Erwin leaves without her, meeting Wolfgang, Christl, and Christl’s best friend Brigitte. The foursome head to the lake where Wolfgang switches his attention back and forth between the two ladies and Erwin makes a fool of himself. They have a leisurely day amusing themselves, and eventually head back to the city to start the next week.

I found this film extremely interesting, for two main reasons. The first was the reminder that young people have really not changed at all since the days of this film. These people reminded me so strongly of people I’ve known, and days I’ve spent. I don’t think I could count the number of weekends I’ve spent grabbing a couple of friends and heading out to run around, as I imagine just about everyone else has. We’ve all met people and brought them out with our friends, gotten into random adventures, and had epic days that we wished wouldn’t end.

Everything about these kids, from the way they interact with each other, to the language they used, to their fashion, reminded me of my own life. Their portable windup record player was my iPod with portable speakers. Their paddle boat, which was so much cooler than what we have nowadays, was nevertheless my paddle boat. Their complaining about money and having friends not want to chip in, well you get the idea. In so many ways this felt like not just a pseudo-documentary of its own time, but of mine as well. And, I think that if my parents watched it they would feel the same way. Some things seem to exist outside of time and young people are definitely one of those things.

The other reason that I found this film fascinating has to do with when and where it was made. This film is from Berlin, in 1930, two years before the election of Adolph Hitler, and four years before the Nazis finished taking over the country. This was during the period known as the Weimar Republic, and one year after the 1929 stock market crash that trigged the Great Depression. This period of German history has always been portrayed, at least to me, as being a horrible time where the ravages of World War I were taking their toll. We’ve been told over and over again, that the depression, combined with sanctions that the Allies put on Germany, created an atmosphere that allowed the Nazis to rise to power. That inflation, and unemployment, created a populace who were dissatisfied and ready to be coerced into scapegoating an entire segment of their population.

In my mind that created a certain narrative, that I never really examined closely, about what life must have been like in Germany during this time. A sort of mental picture that wasn’t connected to any real knowledge or understanding. This film completely shattered that narrative. This is not a film that depicts a weary nation barely scraping things together. This film showed people who were happy, life that had moved on from war, and a society that, to my eye at least, looks extremely evolved and enjoyable. I identified with the characters in this film, some of them reminded me of people I’ve known. To see that, and to know what was about to happen, was shocking to me. This film, completely unintentionally, opened my eyes to how I’ve had an unbelievably simplistic understanding of this history. Even if the film had absolutely nothing else to offer that would be enough for me. - Nov 9th, 2014