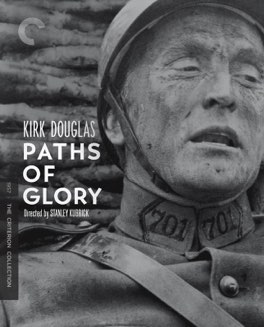 This film suffers from painfully bad acting and a mostly stupid story. It’s saved by wonderful presentation and a couple of great scenes. Still, I can’t really recommend anyone watch it.

I have very conflicted feelings about this film. More specifically, I’m on the fence as to whether I liked it or not. I certainly liked parts of it. Some of the dialogue is extremely well done, full of interesting anti-war points and sentiments. And I really liked the very end, it finished on a poignant note that elevated the proceeding. On the other hand, the acting is absolutely horrifically terrible and most of the story is fairly stupid.

It’s sort of a black comedy of bureaucracy, a film about the idiocy of the chain of command. It’s World War I and we are with the French army somewhere across the trenches from a German stronghold called the Ant Hill. A general is ordered to take the stronghold even though he knows it’s almost certainly impossible. An attack is carried out to a predictably catastrophic result. After the failure of the attack the general orders a court-martial for three of the men, chosen randomly, for cowardice. The rest of the film concerns the fate of the general, the colonel in charge of the attack, and, of course, the three men being court-martialed.

The problems here are more centered around the acting. It is, as I said earlier, absolutely the worst. Laughably bad really. I suppose my problem starts with a common complaint I have about Hollywood films from this era. The entire story supposedly takes place in France, with the French army, and yet all the actors here have American accents. And not just American accents either but regionally specific ones. It makes it almost impossible for me to take them seriously. That would be bad enough by itself but the acting is so terrible that it’s probably a good thing they didn’t attempt French accents too. No one acquits themselves particularly well, especially not the star of the film, Kirk Douglas, who is so over the top ham that it’s painful to watch.

The film is ultimately salvaged in a few ways. The first is with expert direction and cinematography. I have yet to see a Stanley Kubrick film that isn’t visually stunning. The scenes are framed so well and everything is so professionally done that it almost distracts from the terrible acting. Almost. The second is with a couple of key moments of great plot. There is a scene early on where one soldier attempts to convince another that what they are really afraid of isn’t death but actually injury. It’s incredibly well done. The ending is another great scene that left me with a good taste in my mouth, something I didn’t expect at all up until that moment. But, in the end, this is still a flawed film that is hard to enjoy. - Apr 1st, 2014