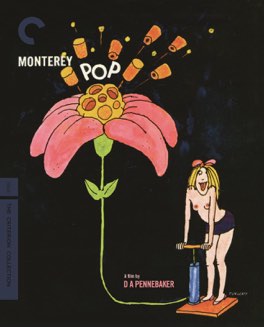 An important and evocative document from a very different time in American history. So wonderfully made and so interesting as a cultural artifact. Plus, it’s just plain awesome.

This is a very special film. It so perfectly captures a moment in time, specifically the so-called “Summer of Love” of 1967, when roughly 100,000 kids converged on Haight-Ashbury here in San Francisco.

They were surrounded by phenomenal music, culture, and alternative lifestyles, and they went wild. The Monterey International Pop Festival, organized by John Phillips of The Mamas and the Papas, was a major part of that summer. It featured many of the biggest bands of that movement, some of whom hadn’t even been introduced yet.

And this film, essentially a highlight reel for the festival, showcases everything that was going on.

There’s no story here, it’s pretty much just a snippet of each performance from the weekend. And that’s totally fine, because the performances are universally incredible. From the beginning with The Mamas and the Papas all the way to the end with Ravi Shankar they are absolutely wonderful.

It’s so great to see so many of these musicians at a time in their careers when performing live for this kind of audience was such a huge thrill. Janis Joplin is so clearly blown away by the reaction she gets from the crowd, and the film has a really nice shot of Cass Elliot of The Mamas and the Papas losing her mind at what she’s hearing.

The festival was also the coming out party for Jimi Hendrix and Otis Redding, both of whom have their entire performances featured on the companion films Jimi Plays Monterey & Shake! Otis at Monterey. Both are absolutely mind-boggling good, and in almost totally different ways. It’s so awesome to see both of them at the height of their powers respectively.

Redding is especially interesting because he died just a few months later, Monterey Pop was essentially his last real performance, and he definitely made the most of it.

The music is the highlight, of course, but I have to say I enjoyed the crowd shots possibly even more. I’m a huge fan of this era of fashion and man was there a lot of it to stare at. So many beautiful and interesting people enjoying an amazing weekend of music. It’s hugely entertaining and interesting.

Also, to see all these people so excited for what’s happening, so sure that the world is becoming a better place, it’s both inspiring and adorable quaint. This was an era where people believed that music could, in a literal sense, change the world. And, to a certain extent, it did. But with the ability to watch this all in hindsight it’s somewhat bittersweet.

Still the camera work here is wonderful, it’s not easy to make a series of live performances easy to watch but director D.A. Pennebaker accomplished just that. Each artist is given a completely appropriate presentation and each performance is wonderfully celebrated.

The one sad thing about the film is that it’s so short. None of the artists get more than two songs, and even then the songs are rarely complete. The performances are so transcendent that I really wanted more.

Luckily that’s not the case for the companion films which, as I said previously, feature the entire sets of both Jimi Hendrix and Otis Redding. And it makes such a huge difference. Listening to Jimi talk between songs, in his own inimitable way, really turns him into a real person instead of just a guitar genius. He plays with so much energy and passion but clearly had a great sense of humor as well. The performance includes quite a few of his most well known songs, and of course the famous moment when he set his guitar on fire. It comes across as insanely powerful and moving.

Redding, on the other hand, was not the same kind of unapproachable genius as Hendrix, but nevertheless an incredibly gifted and energetic performer and his set is equally moving and intense. The way he works the crowd is like an instruction manual on how to get a large number of people to be completely invested in what you’re doing. His performance is mind-blowing, I knew he was great but I had no idea he was this great.

Together these companion films really flesh out the main documentary, the whole thing ends up coming together as a cohesive record of one of the more incredible periods in American cultural history.