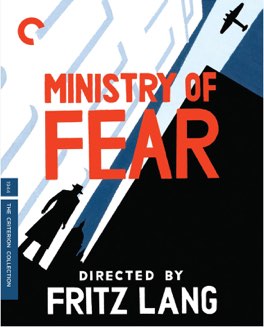 This is an absolutely wonderful suspense thriller. Everything works perfectly to create a mood that cannot be described, it must be experienced.

This is the first Fritz Lang film I’ve seen, and now I get why people love his work so much. Alfred Hitchcock may have been the Master of Suspense, certainly I love his films, but this is something else entirely. Lang creates suspense not just with the situations, which are potent, but with the mechanisms of film making as well. He heightens tension with his use of shadows, which are elegant and yet scary. His use of various camera angles is amazing, there’s one shot in this film that actually made me sit up in delight and surprise. He seems to treat the entire film making process as capable of generating suspense, and it works marvelously.

The story here is great. It mixes a couple of the standard tropes of mid-1940’s western cinema, those of the innocent man who must prove himself by ferreting out his assailants, and the uncovering of a Nazi spy ring by ordinary people whose lives end up in very grave danger. Both of these themes were omnipresent during this time. They power most of the British Hitchcock films for example. The films of this period make it seem like Nazis were hiding under every bed, behind every curtain, and at the end of every alleyway. It must have felt like that to people at that time, all the warnings against idle talk, all the suspicion of anyone not from your country. This film adds some of the psychology of the best Hitchcock films as well, represented here by a man bearing the burden of assisting his terminally ill wife commit suicide. The story begins with that man, Stephen Neale, being released from an asylum, after having been sent there in punishment for helping his wife. All he wants is a simple life, surrounded by lots of people, but he doesn’t get very far before he’s thrown directly into danger. The suspense deepens wonderfully from there, before hitting a very satisfying conclusion.

The acting here is more than a match for the excellent story. Ray Milland is everything you want out of a noir hero. He’s witty, charming, a bit unhinged, very attractive, and with a definite dark side. Marjorie Reynolds is luminescent as the female lead. She’s a revelation in her humor, style, and grace. She provides the perfect counterpoint to Milland and, really, she’s the engine that drives this film forward. The supporting cast is phenomenal as well. From Carl Esmond, to Alan Napier, and Hillary Brooke, there isn’t a weak link to be found.

The acting and the story are both excellent, as I said, but really it’s the little creepy details that make this such a wonderful film. It’s the small things, like the man tailing our hero compulsively cleaning his nails throughout the film. It gives his character such a sinister edge. The séance, the weird clothing that Mrs. Bellane wears, the various camera angles, everything comes together perfectly. This isn’t a deep movie by any means, it doesn’t have a big idea or a point to make, it’s just an absolutely perfectly done suspense thriller. This film reflects a master craftsman at the absolute height of his craft, what a wonderful film. - Apr 10th, 2014