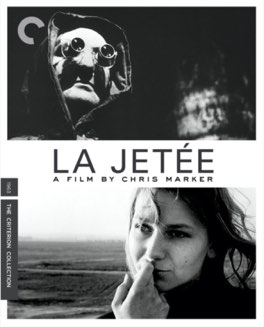 A surprising and impressive film that introduced me to a completely different way to tell a story. Full of smart ideas and impressive scenery, this was definitely a treat.

This film, despite it’s brief running time of 28 minutes, is shockingly interesting and engaging.

What makes it even more impressive, is that the entire thing is filmed not with motion but rather as a series of still photographs. Director Chris Marker couldn’t afford to rent a motion-picture camera, which is why he ended up going this route, but it turns out to be an inspired choice.

I also wonder if Marc Caro and Jean-Pierre Jeunet were inspired by this film when they made The City of Lost Children. Certainly there are some visual similarities, especially in the look of the bad guys, and a certain amount of narrative similarity as well. This is a beautiful film, full of thoughtful and creative ideas. I really enjoyed this one.

The story follows an unnamed man, living in the streets under Paris, sometime after World War III. Paris itself is now radioactive and the few remaining survivors are kept in underground camps by the victors of the war. The man, who witnessed the death of an unknown person at Orly Airport as a child, and who vividly remembers the face of a beautiful woman he saw there, is taken by his captors to participate in a series of experiments.

Specifically, they are trying to send someone into the past in order for them to find food and energy and thus save the present. They explain to the man that they’ve tried this with quite a few prisoners, but that they think his association with the woman from his past will allow him to move more easily.

As it turns out they are correct, and the man begins to live his life as a series of moments with this woman in his past. Eventually, after he has grown used to time travel, they send him to the future as well, and he learns what their real plans are for him.

The film is absolutely fascinating. The story is told via narration, and Chris Marker created separate narratives for French and English, with the intention that you should watch using the one you are most familiar with.

The English narration tells an absolutely ingenious and simple story, one that has been referenced by many films since, like 12 Monkeys, which Terry Gilliam made as an homage to this film. Unlike that film, or The Terminator, another film that owes a great debt to this one, however, this is a series of still photographs, and that gives everything a much more eerie quality than it would have had as a traditional film.

The photographs are absolutely beautiful, and the images of post-war Paris are especially impressive given the extremely limited budget Marker was working with. There is one moment of actual moving imagery in the film, supposedly Marker was able to rent a proper camera for an afternoon, and that little bit of movement kind of makes the entire film.

It’s shocking in a sit up and take notice way when it happens, and he definitely saved it for the best possible moment in the film.

The central ideas here of paradox and fate are not unusual as fodder for films, but I’m not sure I’ve seen them presented more straightforwardly and yet complexly, than they are here. Marker tells a very terse story, not wasting any of his precious running time with superfluous moments, and yet there is still an incredible amount of layered meaning to unpack.

Marker was a huge Alfred Hitchcock fan, specifically of the film Vertigo, and that sense of repeating the past and living in a specific moment is heavily drawn upon in this film. The idea that time is a spiral, or that we return repeatedly to moments that strongly affected us, is a powerful idea to me.

I definitely think some people live in the various moments of their past that shaped them, constantly returning to these memories as a source of sustenance, or distraction, or hope, or pain.

As people we catalogue our experiences and very few of us live completely in the current moment. Most of us live in a combination of our present, the parts of our past that are motivating us, and the future we hope to achieve.

This film demonstrates that idea incredibly well, and it makes for a truly interesting experience. - Oct 5th, 2014