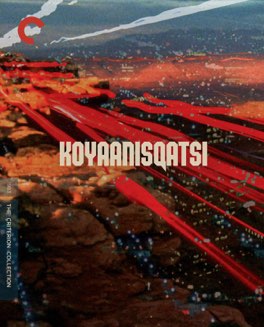 An absolutely stunning visual achievement that’s also one of the most inspiring documentaries I’ve ever seen. Everyone should see this film at least once.

Well then, that was intense. Intense in a visual sense, this film is unbelievably beautiful, and also intense from a conceptual sense. Like the best video at a Godspeed You! Black Emperor concert ever. I’ve rarely seen a film that was this visually stimulating, while also remaining so unbelievably thought-provoking. This isn’t a film that I can digest quickly and decide conclusively how it makes me feel or what I think. Instead it will likely live in the back of my brain for quite a long time, maybe forever. It’s that full of meaning and interest for me, with so many different sides to examine.

There’s no real point in trying to summarize the story of this film, as there isn’t one in any traditional sense. What we get instead is a series of gorgeous, and sometimes disturbing, imagery. We start with a rocket blasting into space, continue into shots of nature undisturbed by human hands, and finish with many shots of human beings in their natural habitat, and the effects we’ve made on the world. The whole thing is set to a truly haunting suite of music by composer Philip Glass, with a deep voice chanting the Hopi prophecies that make up the title of the film.

I’ve read some essays of this film that think that the message it presents is very clear, one even said that it was shockingly unsubtle. I have to say, I don’t agree with that at all. I think that if you are watching this film with a certain message in mind, you’ll definitely find it, but that you’re missing quite a lot that it has to offer. Most of the essays I read describe it as being anti-technological or strongly environmental in nature. And it could certainly be seen that way, but I don’t know that I agree that that’s the only way to watch it. The film definitely juxtaposes nature as uninterrupted force with nature as affected by humans, and could be understood to suggest that the balance is completely unhealthy, but it also showed me something else.

Don’t get me wrong, I read the text at the end, I understand that director Godfrey Reggio chose the title to mean “life out of balance,” or even “a state of life that calls for another way of living.” However, I also know that Reggio didn’t want the film to have a title, and I’ve read Reggio’s comments that “it is up [to] the viewer to take for himself/herself what it is that [the film] means.” And for me the film hewed much closer to his comment that “these films have never been about the effect of technology, of industry on people. It’s been that everyone: politics, education, things of the financial structure, the nation state structure, language, the culture, religion, all of that exists within the host of technology. So it’s not the effect of, it’s that everything exists within [technology]. It’s not that we use technology, we live technology. Technology has become as ubiquitous as the air we breathe…”

That comment sums up almost perfectly the way I watched this film. The idea that we, as a civilization, have become the very technology that we produce. That it’s impossible to fully separate us from that technology, in good ways and bad. That we are a human scale assembly line. That we are a structured and repeating system that can only be fully visualized from outside, and that it looks very similar to the structures we’ve built inside. But, I also saw the relationship this film indicates between that structure and nature itself. We may be the assembly line, but we’re also the waves crashing on the beach, or the clouds moving through the sky. I think it’s important to remember that we aren’t a force that is being exerted upon nature, that we are nature as well. We may shape the landscape, but we are also a part of it.

I think the underlying point is more of a warning than anything else. The idea, perfectly captured here, that we are changing the landscape in overwhelming ways. We build and we destroy. We mold and we shape. We are constantly reforming the world around us, and we’re doing it on a more and more basic level as our technology advances. This film was made far before the current science of Climate Change, but it seems eerily prescient in its presentation of what our technology is doing to the world around us. We have the power to destroy, but we also have the power to create, and it’s up to us to decide what we want to do.

Some people have seen this movie as “oh no, humans” and I think that’s very limiting. To me I saw more of a suggestion that technology is causing us to lose some of our individuality. In this way it reminded me a bit of Jacques Tati’s work, specifically his masterpiece Playtime. Tati was a humorist, but he was also deeply disturbed by the way the modern world overwhelms our individual nature. Reggio also seems deeply concerned that our technology has changed us, that we are no longer individuals but rather simply parts in a giant machine. I definitely think both directors would agree that the world was changing in increasingly scary ways. I don’t have answers to any of this, but I’ll be thinking about it, and I think that would make Reggio happy. - Nov 15th, 2014