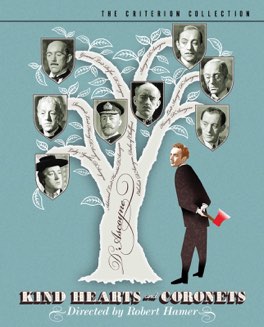 A classic British black comedy, this film is charming and brilliant. The story of a man committing brutal murder, while never giving up his wit and grace, it’s just about perfect.

There is something decidedly charming about a man who, in the service of revenge, commits unconscionable murder with dramatic flair. It’s reflected in one of my favorite books, The Count of Monte Cristo, and also in this absolutely wonderful film. What our anti-hero does is horrible and clearly insane, but he does it with such humor and civility that it was impossible for me not to spend the entire film rooting for him. It didn’t help that his victims were horrible people who had legitimately wronged him, or that the few decent characters were spared his vengeance. This is a film about a truly terrible man, and yet he’s absolutely my favorite character in it.

The story is both complicated and, ultimately, straightforward. It’s told in flashback narration, which can destroy suspense, but in this case the interesting thing about the film isn’t what happens but how. The narration is provided by Louis Mazzini, played absolutely perfectly by Dennis Price, the only son of a daughter of the D’Ascoyne family, the hereditary Dukes of Chalfont. He recounts his tale on the night before he’s going to be hanged for the murder of a childhood acquaintance of his, the husband of a woman he’s been sleeping with. In it he tells of his mother being cast out of her family for marrying for love, and his desire to get revenge on her family by killing his way to being the next Duke. Ironically, he’s in jail for the one murder he didn’t actually commit, he’s been framed. I’ll leave what happens next as a surprise but the ending is truly brilliant.

The acting is uniformly wonderful. Dennis Price is, as I said, perfect as the charming serial killer at the heart of this film. He brings exactly the right kind of class and wit to his role, allowing us to be completely on his side. Alec Guinness, who I only really knew from his role in Star Wars, is incredible. He was a huge comedic star in Britain long before he played Obi-Wan Kenobi, a role he thought stupid and pointless. Here he plays all eight members of the D’Ascoyne family that Louis plans to murder. It’s a brilliant idea, giving all the family members legitimate resemblance to each other, while also adding a wonderful comedic touch. He approaches each one differently and creates compelling characters for all of them. Joan Greenwood is great as Sibella, the childhood friend Louis is sleeping with. So is the beautiful Valerie Hobson as the prim and pure wife of one of the first victims, whom Louis courts after killing her husband.

This film has two slightly different endings, one for the British market and one for the American. The minor difference is the apparent fate of Louis. In the British version it’s left unknown, it doesn’t look good for our anti-hero, but then he’s proven that he can get himself out of trouble. In the American one, on the other hand, due to the Production Code of the time, it’s made fairly clear that “crime doesn’t pay,” and that he will suffer for the murders he’s committed. I have to say that I think whether Louis ultimately pays for his crimes is just about the least interesting thing about this film. Far more important is its incredible humor, charm, and the dichotomy of the two woman he loves in this film. On the one side Sibella, his conniving and petty childhood friend that only shows interest in him after he has achieved standing. On the other the beautiful and kind widow of one of his cousins, who stands by him even after he has been accused of murder. His quote at the end is incredibly apt; “How happy could I be with either, Were t’other dear charmer away!” - Apr 20th, 2014