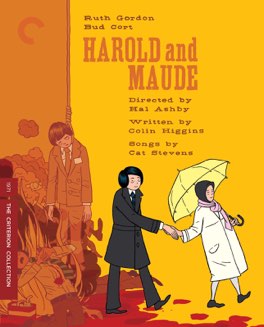 A startlingly passionate and unconventional love story between possibly the least likely pair in film history. This film is an absolute masterpiece.

This is a perfect film, although it’s definitely not for everyone. The basic premise tends to weird people out, but if you can get past that it’s truly wonderful.

It’s a beautiful film, with incredible performances, and an absolutely amazing soundtrack. It’s full of love, death, sadness, hope, despair, and humor. It’s about life, and it tells an unbelievably heartbreaking and delightful story. It’s one of my favorite films, which will undoubtedly make it as difficult as ever to write about, but if I can convince anyone to see it I’ll be very happy.

It will absolutely astonish you with its simplicity and power, as well as its surprising beauty and humanity.

The film follows Harold Chasen, a depressed and lost young man, who lives his life under the watchful eye of his rich and overbearing mother. He takes delight in the simple things in life; going to funerals of people he doesn’t know and attempting ever more ridiculous fake suicide attempts. His mother decides that she’s finally had enough and that it’s time for her son to grow up and get married.

She arranges a serious of computer dates for him, that go hilariously terribly. At the same time he meets the erratic and fascinating Maude, a week before her eightieth birthday. She’s a former holocaust survivor, something only lightly alluded to in the story, and she’s since dedicated her life to new experiences and to making the most of her time before she goes.

The film is shocking to watch today, this love affair between a twenty something young man and an almost eighty year old woman. I cannot even imagine what it must have been like to see it when it was first released, it must have just been a revelation. It tells the type of story you so rarely see in any film, let alone a film that came from Hollywood.

It’s an incredibly complex story, with a ton of character development that could have turned into a spectacle if not handled perfectly by the actors. Luckily for us they are definitely up to the task. Bud Cort, who went on to be in a bunch of other films I love, like the incredibly weird Brewster McCloud and The Life Aquatic with Steve Zissou, is unbelievable here. He plays the part of the weird, and likely suicidal, Harold with such an impressive mixture of sadness and innocence.

It’s a performance that is perfectly matched by Ruth Gordon, an actress who got her start in the silent era. She brings a complete vitality of life, but with an ever present aura of deep sadness as well. Her Maude has clearly been through some real things in her life, and yet she’s somehow found a way to rise above it all and love life for what it is.

She opens Harold’s mind to a world he’s never even imagined could exist, and teaches him to finally live and to love, for the first time in his life.

The cinematography and soundtrack are characters in their own right in the film. The shots of the 70’s era Bay Area are so amazingly structured and arranged. The framing is unparalleled, there are many shots here that I could just stare at for hours. From the opening sequence of Harold hanging himself in his mothers drawing room, all the way to the amazing final shot of the film, everything seems to have been constructed to create a sense of the larger world but also to showcase these intricate people in all their passion and their foibles.

The cinematography, as impressive as it is, wouldn’t be anywhere near as affecting without the soundtrack. The entire thing was composed by singer-songwriter legend Cat Stevens and the use of his songs throughout the film provide the perfect emotional impact. The songs are placed at the most appropriate moments possible, always adding to the power of the story. They are so artfully composed into the fabric of the film, and the lack of any other music makes their impact even more powerful.

This is an unbelievably special film that is ignored by far too many people for being “strange.” Everyone owes it to themselves to ignore those people and see it for themselves, to experience the amazingly perfect film that it is for themselves. - May 13th, 2014