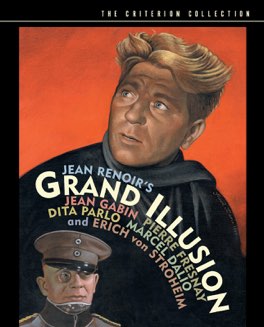 An incredible and beautiful film that has extremely interesting points to make about the stupidity of nationalism and the bonds of shared experience.

This is a fascinating film, made of incredible ideas and so full of humanity. I absolutely loved it. It’s unlike any other war film I’ve ever seen. Rather than focusing on battles, heroism, lives lost, and things like that, it focuses on people. The various characters here, and really the class system they represent, are the real meat of this film. It’s so well done that I think you can watch it and not even realize that you understand, almost instinctively, the point that’s being made. The best films make their point while completely avoiding being preachy, a noble goal that this film definitely achieves. A film about war that has nothing to do with fighting, and everything to do with people, is a rare treat indeed.

As the film begins we find ourselves with some French officers during World War I. They have been ordered to fly a reconnaissance mission over territory that’s been badly mapped. After being shot down by a German officer, von Rauffenstein, who plays heavily later in the film, they are taken to a prison camp where they are put with other French officers. The actual facts about the war are largely ignored, instead the film focuses on their relationships with each other, and the other prisoners they encounter. Of the two men, one is from a noble family, the other was a mechanic in his pre-war life. They have almost nothing in common and it shows, they aren’t able to connect as people in almost any way. When they are later transferred and the new officer in charge of the camp is the same von Rauffenstein who initially shot them down, himself a member of the German nobility, the French nobleman and the German nobleman find that they are absolutely able to connect as peers. On the other hand, the mechanic is never comfortable with his superior officer, and is much more able to connect with the other middle and lower class French prisoners. It’s a powerful point that nationality is a stupid way to divide the world, instead our class and life experiences make for a much more powerful bond.

I have to say, if you have to be a POW I’d try and be a French officer in a German prison camp in this film. I don’t know if it’s an accurate portrayal of their lives during the period but it’s really not bad at all. They get parcels and letters from home that are barely inspected, in fact they eat better than their guards as Germany was apparently suffering from a food shortage at the time. They seem to spend most of their day in leisure activities, and at one point receive a shipment of woman’s clothes that they use to create a theater performance for themselves and their captives. The whole thing is shockingly civilized, certainly in comparison to the treatment of POW’s during World War II. Maréchal, the former mechanic, suffers the worst of the prisoners we meet, sent to solitary confinement for encouraging the prisoners to sing La Marseillaise after news of a French victory, but really even he has it pretty good.

The acting is phenomenal. Jean Gabin is perfect as the mechanic Maréchal, a man who cannot stomach being held captive and, even with ample motivation to the contrary, just wants to get back to the fight. Marcel Dalio is equally good, imbuing his French Jewish prisoner of war with so much humanity and kindness, and dispelling myths of the stingy Jew as he gladly shares the food he’s sent with his fellow prisoners. Pierre Fresnay is great as the aristocratic commanding officer de Boeldieu, so full of honor and completely aware that his class will be ending their relevance in world affairs. And Erich von Stroheim is absolutely incredible as the surprisingly honest and reasonable commander of the final POW camp they get sent to. His conversations with Fresnay are a major reason that the point of the film is as compelling as it is. The film is absolutely beautifully shot and the story moves along phenomenally well, especially given that most of it takes place in small rooms with little apparent action. This is truly a masterpiece, one that we’re lucky to have given what it went through under the Nazi occupation of France. No less an authority on controversy than Nazi propaganda minister Joseph Goebbels declared this film Cinematic Public Enemy No. 1, and anything that he hated should be seen and discussed by as many people as possible. - Apr 15th, 2014