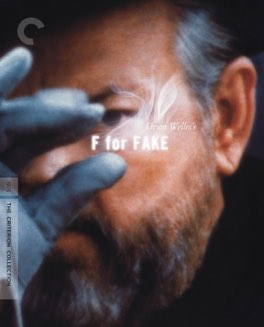 This is a phenomenal film, about trickery, and fakery, and art.

Orson Welles had the most magnificent speaking voice, really speaking manner, of any actor I can think of.

Listening to him talk, when he’s on a roll, is spellbinding. He phrases everything just right, with a cadence that is both intoxicating and captivating.

The narration in this film captures this quality more than any other role of his that I can remember. Listening to him chatter while performing the magic tricks that start the film immediately makes me smile and serves as wonderful beginning for a truly remarkable film.

This movie is hard to explain to someone who hasn’t seen it. It’s equal parts documentary, essay, con job, history lesson, and narrative film.

Early in the film he promises that for one hour everything he says will be completely true, and then proceeds to lie his head off with almost every aspect of the film making.

A great example of this is all the conversations he created in the editing room, between Elmyr and Clifford Irving, that you can tell didn’t actually happen. Or when he injects his own dialogue into the story, as though prompting the people he’s filming as to what their next line should be.

At the heart of the film is documentary footage his friend and collaborator, François Reichenbach, filmed about Elmyr de Hory, a famous art forger living in exile on Ibiza.

But from this he weaves a completely different narrative than the documentary was intending, turning it into a fascinating essay on the nature of authority, expertise, and the value of art.

I can’t think of another director who could take this ramshackle a collection of footage, and assemble it into a masterpiece. The pace is frenetic and the story sometimes confusing but that merely rewards multiple viewings.

I first saw it after reading Robert Anton Wilson’s Coincidance and was blown away. That was about 15 years ago and each subsequent time I’ve watched it I’ve had some new moment stick in my mind.

This time it was a quote, supposedly from Kipling, and I’ll end with it now.