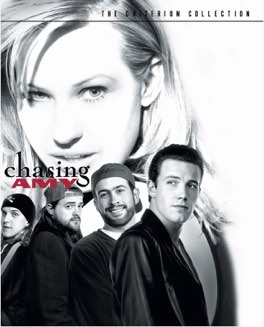 A fairly juvenile movie that nevertheless manages to rise just a little bit above its own mediocrity to make an interesting point.

This is not a great film, Kevin Smith’s idiosyncratic dialogue and dick and fart joke fascination makes sure of that. The acting is mediocre, the story is unbelievable and childish, and the dialogue is so stilted it hurts. It’s not a great film, not by any stretch of the imagination, but it is a bit of a charming one. It’s Kevin Smith’s most personal film, pretty much the only one where he really had something to say. It’s a film that has all the unfortunate trappings of his oeuvre, but it’s wrapped around an actual point worth making. Ultimately, it fails to achieve its goals, but the fact that it even has goals at all makes it worth noting.

The story stretches credibility pretty much past the breaking point. A young comic book artist meets another comic book artist and falls for her. He’s never felt this way before but he has a problem, she’s gay. Somehow they overcome that issue but then he discovers that she has a past, she took part in a variety of sexual experiences that are outside of what he feels comfortable with. Knowing this tears him apart and he ruins the best relationship he’s ever had. The fact that this is a movie about a straight man convincing a Lesbian to fall in love with him is pretty much the least ridiculous thing in a completely absurd and stupid story. Inside that story is a point though, and it’s actually a pretty good one. The film is ultimately saved, just barely, by a couple of scenes. There is a moment, just after the climax of the film where the main character, Holden, runs into Smith’s Silent Bob character, played as always by Smith himself, and he gives a speech where the point of the movie is laid out in simple terms. It’s well done, which I suppose makes sense given that this film is about Smith’s actual life. The other is the ending which, almost miraculously given that nonsense that has proceeded it, manages to be heartfelt and a little bit touching.

As I said, the story is about Kevin Smith’s life from around the time the film was made. Specifically his relationship with Joey Lauren Adams, who plays the aforementioned Lesbian. While their relationship had none of the bad stereotypes of Lesbian culture and sexual experimentation that people rightly point to as major flaws with this film, it did have a similar problem. That problem was Adams’ previous sexual experience and Smith’s inability to deal with feeling like he wasn’t on her level. He has said in interviews that it ultimately destroyed their relationship, when he acted the same way Holden does in this film. Knowing all of that while watching the film, I have to wonder how Adams felt about playing herself on screen in an over-dramatized version of what actually happened to them. Perhaps the experience helped her with her character, she’s pretty much the only actor here who turns in a good performance.

Smith’s monologue about his inability to see that Adam’s wasn’t looking for a stereotype of an “experienced guy”, that she was just in love with him, is the worthwhile point of the film. It’s a valuable message about accepting when good things are happening to you, and not looking for an excuse to tear them apart. Of not trying to be something you think someone wants, but to just be the person they fell for in the first place. The hurt in Adams’ face when Holden accuses her of being a bad person because she lived before she met him definitely rings true as well, to have someone she cares about so much treat her that way is heartbreaking. This is a melancholy film, Smith was clearly not over the things that had happened when he made it. And that melancholy, trapped though it is in a overflow of stupid dialogue and pathetic attempts at humor, eventually rises to the surface. This film made me think, an outcome that can definitely not be said of his other work, and that’s something. - Apr 28th, 2014