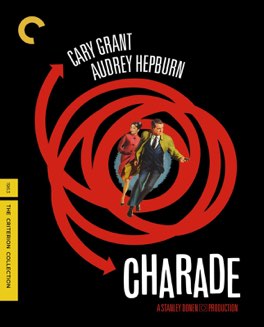 Beautifully made, from the Maurice Binder designed opening credits, to the hilarious scene at the end, this film is perfect.

What a marvelously wonderful film. Cary Grant and Audrey Hepburn were absolute treasures, and in this film we’re lucky enough to have them both on the screen. It’s the only one they made together and they definitely make the most of it. They are perfect here, with a chemistry that’s readily apparent, despite their extreme difference in age. Rumor has it that they also had chemistry off-screen, with Audrey Hepburn supposedly falling for her co-star, only to have him tell her he was too old for her. If that’s true it’s probably the most incredible thing about the whole film, who in their right mind says no to Audrey Hepburn?

The film itself has many things to recommend it other than Ms. Hepburn and Mr. Grant. The colors are wonderful, the mid-sixties shots of Paris are magnificent, the plot is intricate and complex, the supporting cast does an admirable job, and the whole thing is extremely funny. But, ultimately, it’s the magic between those two phenomenal actors that’s the main draw here. This was Cary Grant’s last role as a romantic lead, one of his last roles period, and he couldn’t have chosen a better script to go out on. He absolutely exudes charisma and humor in every scene.

As for the story being performed, it’s a great one. Not terribly deep I suppose, but it has more than a few points of interest. Starting with the fact that this is a spy film with a female protagonist. Remember, this was the era of Sean Connery as James Bond, seducing every woman in sight. It must have seemed almost anachronistic to make a film like this, in 1963, with a Hitchcock type romantic coupling at its core. And it must have been an even bolder choice to have Audrey Hepburn, mostly known for playing various ingenues, be the woman to take that risk with.

Ultimately though, this film is just pure fun. It so effortlessly plays with the audiences expectations. From the very beginning nothing is quite what we expect and we’re kept constantly in suspense, wondering what’s going on and whose side everyone is really on. It’s quite impressive that, even to the very end of the film, we’re still trying to figure it out. The whole story only becomes clear in the final scene, and at that point all I can think is that I want to watch the whole thing all over again. - Mar 18th, 2014