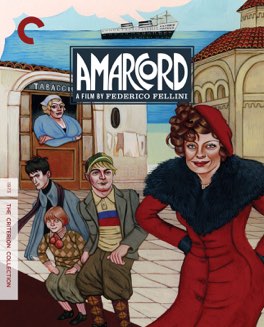 An expertly made, and beautifully shot, film about horrible, boring, pointless people that I didn’t enjoy much at all. I can’t recommend anyone watch this film.

So, I really didn’t like this film at all. I won’t say I hated it, there were enough scenes that redeemed it from that. But, I certainly can’t say I liked it at all. I’ve read that this was Federico Fellini’s most personal film, that it comes the closest to describing his childhood in small town Italy. If that’s true, he must have really hated childhood. For the most part this is a film full of loathsome characters, horrible situations, and very little charm. Just about everyone is vulgar and crude, and with very little human sympathy. And maybe that’s life, and certainly some people seem to find a charm and joy in that, but I’m not typically one of them.

I’m not saying I don’t like unhappy things, I definitely enjoy sad stories, and often find a strange comfort in them. But I like to be able to find something or someone to like in a work of art, and I didn’t find that here. Just about everyone in this film is horrible. From the school kids, who are absolute terrors, to their parents, to their neighbors. Everyone here is basically the worst. Not evil, just completely without sentimentality, and without the coolness or brashness to make that work. Just a village full of stupid, hateful, annoying, terrible people. And when the entire cast is like that I find myself wondering why I’m wasting my time paying any attention to what they’re doing. Why spend my time watching people I find terrible? Without even one character to bring me in and make me care, with the possible exception of the vaguely narrator like Lawyer, who unfortunately doesn’t get enough screen time to help much, it’s impossible for me to like this film.

So, if that’s the case, why didn’t I hate this film? What redeemed it enough for me to simply dislike it. Well, like all the Fellini films I’ve seen it’s visually stunning. He recreates this sleepy town so well. There are several scenes that are just flat out gorgeous, and that alone makes the film not a total miss for me. Also, while everyone in this film is basically horrible, there are a few nice moments sprinkled in. There’s a great scene where the father of the main family is being interrogated by the Fascist police that provides a fascinating glimpse into the politics of this era in Italy. There’s also a lovely scene where the entire village floats out to sea, in order to see an ocean liner that’s going to be passing by. And a couple others as well. These scenes bring the film from a total waste to just something that I don’t personally prefer. And they do enough to convince me that it’s possible to like this film, if you have fairly different tastes than I do.

I can’t say much about the quality of the acting here, because I hated all the characters. I guess the acting must be decent, because I don’t hate all the actors. That alone says that they must have done a decent job being the people they were attempting to be. I wonder sometimes, when I see something that I had this little connection to; will I like it later? That’s happened to me before, and I suppose it’s possible it will happen with this film. Maybe I saw it at the wrong time in my life, I don’t know. What I do know is that, for now, I definitely can’t recommend anyone watch this film. It’s far too long for the few scenes I enjoyed to make it worthwhile. - Apr 11th, 2014