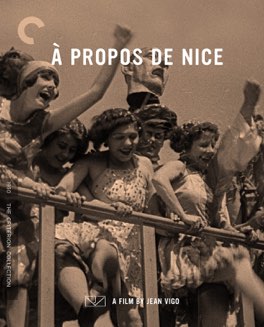 A fascinating artifact from long ago, full of intriguing social commentary. It was beautifully shot, intricately assembled, and I enjoyed it quite a lot.

This film is like a mixture of a really talented student project, a compelling travelogue or city memoir, and a barely concealed social commentary. It’s unbelievably short at 23 minutes, and yet it packs more stuff in it than many films three times as long. This is my first exposure to the work of Jean Vigo, a major influence on the French New Wave that came after him. Vigo, the son of a famous militant anarchist, died at 29 having made only four films total. And yet he seems to have had a monumental impact on many of my favorite directors who came after him. After watching this short film, his first, I can start to see why.

There is a plot to this film, but it’s a bit hard to get at it directly. Part of that is the total lack of any dialogue, not even in the form of the interstitial title cards so common in silent film. What we do have is the music, which is phenomenally well choreographed to what is transpiring on the screen. So, what is happening on screen then? The film is made up of a bunch of semi-connected vignettes about the life of the people of Nice. Many of the shots were apparently captured surreptitiously by hidden camera, and it gives the entire thing a very unaffected feel. The story then, as much as there is one, follows the various things happening around Nice, showcasing interesting people from all walks of life. There is a real sense in the choice of shots that Vigo was attempting to examine the hidden desires of both the people of Nice, and of the city itself.

The shows up mostly in clever editing tricks Vigo plays on the audience. In one example a sitting woman’s outfit slowly changes from the dress she is wearing, through various stages of undress, until finally she’s completely naked. It’s a startling moment, especially for 1930. The shot is from the perspective of a voyeur watching her, and it definitely makes its point about hidden desires. In another example, a shoeshine man is shining a shoe one moment, and the next he’s shining a completely bare foot. There are many scenes like these, sprinkled throughout the otherwise verite style footage that makes up this film. These shots, and specifically the way they are interspersed, really get at what Vigo, and cinematographer Boris Kaufman, were attempting to achieve with this film.

I’ve read that the film was inspired by Bolshevik style newsreels, with their focus on social inequality, and that Vigo was attempting to do the same thing for his hometown of Nice. I can see what they mean; there are a number of shots in the film that consider the nature of inequality and waste. One that comes to mind is of a festival centered around flowers. The film goes from the people at the festival, to the woman who work to harvest the flowers needed, to those same flowers crushed on the ground. It’s not particularly subtle, but it does evoke a strong response. This is film as social documentary, it’s intended to show what Vigo felt was really going on, and not to glamorize things.

It’s a very interesting style, and one that rewards multiple viewings. I spent much of the time just gawking at the fashion and attitudes of the people involved, and I’m sure I missed a lot of the message. Part of that might also be the fault of the giant cultural differences that exist between me and the twenty-something director who made this film so long ago. I’ll admit that much of my understanding of this film came from reading and thinking about it after I finished watching. Still, most of the themes that I read about afterwards I had already found present in the film, I just wasn’t sure to what extent they were intended. After reading the transcript of a presentation Vigo gave with the film when it was originally released I am absolutely convinced that I was on the right track.

All of which was fascinating to learn and ponder, but I think my favorite thing about this film was simply seeing what 1930s Nice was all about. It’s always a treat to see non-actors represented from any period as long ago as this, and it was absolutely incredible to see the wide variety of fashion and attitudes of the everyday French people captured here. I was able to get a strong sense of things like how they lived, where they worked, and what they did for fun. In that sense this film functions equally as powerfully as a valuable documentary of a time long past, in addition to whatever value it has as social commentary. I will always find extreme value in anything that allows me a window into the past. I really enjoyed this film, it was a great introduction to Vigo’s work. I can’t wait to watch it a couple more times and pick up even more of the message. - Nov 25th, 2014