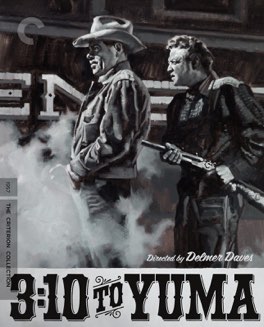 A marvelous film that plays with your emotions in the best possible way. It’s sparse and spare and just about perfect.

This film is a practical demonstration of why re-makes are a difficult, and usually pointless, endeavor.

It is significantly better than the 2007 version in almost all respects. It’s better acted, the cinematography is fabulous, and the story much more meaningful, even though significantly less happens.

The pain of Dan Evans’, knowing that his cattle will die if rain doesn’t come soon, compelling him to volunteer for the insane task of bringing outlaw Ben Wade to justice. The charisma and cavalier lack of concern of Wade counterpointing wonderfully with the nervousness of Evans. The comment from the town drunk Alex Potter that this is the first time in years he hasn’t wanted a drink. It’s all just so great.

Much less happens than in the re-make, the group gets to Contention City easily and most of the drama of the film is in the dialogue between Wade and Evans while they wait for the train to arrive. But the conversation they have is so much more interesting than all the action in the re-make.

The way that Wade hums the film’s awesome title song whenever there is a lull in conversation. The way he keeps saying Dan’s name, while trying to bribe his way out. The tiredness and frustration Dan obviously feels. And of course this is all happening in front of the truly beautiful backdrop of late 50’s Arizona.

It’s the little moments that make this film so wonderful. The interactions Evans has with his wife, her admonishment to be a hero for their boys, and then taking it back near the end when she sees where that path leads.

The scene with Wade and the bartender, where she says that some men you see every day for 10 years and never notice and some men you meet once and never forget. And of course Wade deciding to ultimately help Evans and the rain finally coming.