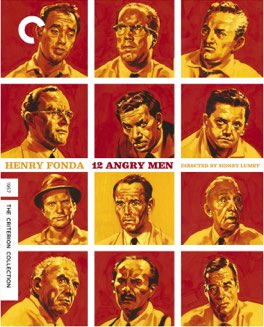 A phenomenally well done film that is as powerful now as when it was originally made. It’s an absolute treasure.

Wow. What an incredible movie. So dramatic and intense, and so eventful. Made all the more impressive because the entire thing takes place in one room. And yet the cinematography here is wonderful, the way the film starts with shots that have multiple characters in them and by the climatic end is almost entirely facial closeups. The camera here adds so much to the drama of what’s happening in the story.

And what a story. So many elements that together form a powerful whole. The various personalities of the men who make up this jury. The casual indifference at first to the fate of the young man accused of murder. The obvious racism and classism that dominates the early part of the discussion. It’s all handled so well, you really get to know these characters without ever knowing their names.

Acting in the 50’s was so completely different than today. There’s no mugging for the camera, no acknowledgement of the fact that it’s a fiction. No sly nod towards the audience that the participants see themselves as playing a character or a role. Especially impressive because most of the actors here were not famous or well known when this film was released. Part of this might be me watching with modern eyes, because I haven’t seen these actors in tons of other films I can really see them as their characters instead of as performers.

They are just 12 men arguing about the innocence or guilt of a person in a situation where the audience has significantly less information than they do. The film starts with the end of the trial, we never see any of the evidence presented. So we’re taking their word that they are accurately reflecting what happened during the trial, and we have no idea if the person accused is really innocent or guilty.

I don’t know what verdict I would have fought for had I been on this jury, but if I’m ever on trial for murder I hope I have someone in the room like Henry Fonda’s character to fight for me. Just incredible. - Mar 15th, 2014