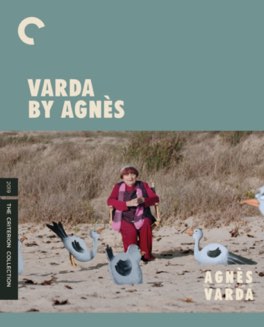 The courage it takes to dissect one’s own work and life like this feels immense. There was really only one Varda, and we were so lucky to have her.

I find writing to be like a muscle. If I haven’t exercised it in a while, the first time is much harder, and I’m surprisingly sore afterwards. It’s been quite a while this time, due to a sudden and dramatic change in my life circumstances. I’m currently away from home, out of my normal routine, and finding the time to even watch these movies has been tricky. But, here I am, and given that the only way through is through, here we go.

What I find fascinating about the experience of watching this film is largely tied into the artifice that surrounds it. What I mean by that, is that this is the first film in the complete Agnès Varda boxset that Criterion released this year. I rarely discuss the physical product aspect of these films, but this time that’s the subject I want to process.

This boxset, like the Ingmar Bergman one before it, isn’t arranged in typical chronological order. Instead, it’s arranged the way someone planning a festival might do it. It’s arranged by meaning and connection. The choice to put this film, which was Varda’s last, first, is therefore deliberate. The film, which is a documentary of a series of lectures Varda gave on her entire filmography, is a fascinating choice for lead-off.

It could go horribly wrong. The film covers background and insider insight into what Varda made, when, and why. That sounds like the worst nightmare for someone who hates spoilers. I don’t think that someone like that would actually be upset with this film though, although given that I don’t particularly mind spoilers I’m, perhaps, not really the best judge.

Still, I don’t think they’d mind, because these aren’t really spoilers in any meaningful sense. What this is, instead, is a shockingly intimate look into the creative process of a brilliant artist. The courage it took to dredge up all this stuff, much of which is connected to real pain from her own life, is incredible. It’s like the best table setting ever for the wonderful meal that’s about to follow. I can’t wait. - Dec 23rd, 2020