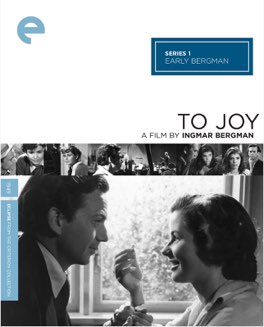 I really, really enjoyed this. The actors had a ton of chemistry and the plot starts to resemble the master at his peak. We’re not there yet, but this is definitely a significant step in that direction.

There’s something a bit worrying about watching a film like this and feeling like the characters remind you of yourself and your spouse. That’s often true in cinema, projecting oneself onto the screen is fraught with peril, but it’s especially true if it’s a Bergman film. It’s even more especially true if the first five minutes of the film let you know that the marriage ends with the tragic death of the wife.

This film starts with a literal bang, and with very unhappy news. Immediately after that it transitions to be a lovely tale of the courtship between two young musicians. Things were so happy that I started to wonder what had happened to Ingmar in this phase of his filmmaking life.

Of course I was wondering prematurely, as shortly thereafter it all falls apart and the eternally brooding Bergman asserts his essential nature. I think Bergman is probably my favorite director. I’ve seen fourteen of his films now, and I don’t dislike a single one of them. They somehow speak to both the sad cynical part of me, as well as my endless optimism about the future.

Both are very much present in the relationship of Stig and Marta. There is so much tenderness and understanding. They seem to really get each other and allow each other to be themselves. At the same time, things fall apart. What’s perhaps surprising is that things come back together. Still, they end up permanently apart. Their ability to pick up the pieces, and to re-find each other, is where I see the similarities to my relationship with my wife. We have our struggles, like anyone, but where we shine is in our ability to resolve them.

There’s something really morbidly nice about the fact that the couple has seemingly solved their own issues when things end. The unexpected death of a spouse is, of course, unbearably awful. Is it made a tiny bit better by the good times they were able to have? Would it feel even worse if she had died right after they broke up the first time? I don’t know, and honestly I don’t even really like to think about it. Like I said, the couple reminds me a little of myself and my wife. Minus the bad parts, of course. - Jan 17th, 2020