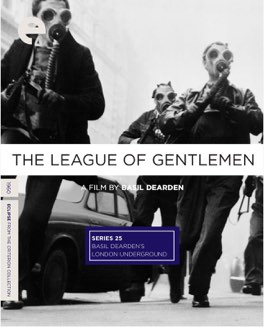 The League of Gentlemen

Oh I thoroughly enjoyed this! It's a stylish and cool heist film from sixties England, what is there not to like?

Anyone who is a longtime reader here will know that I love a good heist film.

There's just something so satisfying about the essential form. There are many variations, to be sure, but they do all tend to follow a few basic parameters. There's the getting the gang together phase. There's the planning the heist phase. Finally there's the executing the heist, and what comes next phases.

What makes this film extra special is the what comes next phase.

Because what I want to talk about is the very end of the film, I'll warn you all now. If you haven't seen this yet, I'm about to spoil it rotten. Still here? Ok, let's talk about it.

This film follows a mostly conventional road through the various phases I've laid out. There are some nice twists, such as the participants essentially being blackmailed into participation, but things don't start out particularly unusually.

What sets this film apart is the ending. After the heist is through, the usual saying goodbye and going our separate ways time begins. The crew is surprised by an unexpected visitor, but even that is being dealt with fairly beautifully.

Suddenly the phone starts ringing, and it's the police. They know. This is what sets this film apart from basically every other heist film I've seen. The criminals don't get away with it!

To be sure, they pull off the job perfectly. But one tiny little detail trips everything up. This isn't what's supposed to happen here, and it totally subverts the form. It takes an already entertaining film and makes it something special.

There's something so powerful about taking the audiences expectations and shredding them. Not giving the audience what we want can be a very dangerous game.

Our collective sense of things like morality and justice are surprisingly strong, and a movie can completely ruin itself by not having the ending that we demand. This film manages to avoid that problem, by making the ending resolve in a “crime doesn't pay” manner, but without making it seem like a morals code demanded that.