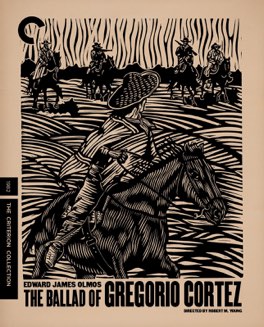 The Ballad of Gregorio Cortez

Oh I really enjoyed this. Edward James Olmos, the manager from Major League, and Maurice from Northern Exposure? In a cool Western about language incompatibility? Yes, please!

I am a person who is somewhat obsessed with the process of communication.

This film then, with its novel method of showing a breakdown in communication, was always going to be something I found at least interesting. On top of that it‘s one of the more innovative Westerns I think I‘ve ever seen.

This film tells the eponymous story suggested by the title. It's based on a true story in fact. The real life Gregorio Cortez, much like his movie counterpart, was a Spanish speaking Mexican-American living in early 20th century Texas.

One day he had an encounter with a local European-American sheriff, which led to the sheriff shooting his brother, and Cortez shooting the sheriff. The film tells this story through a really cool use of flashbacks and also Rashomon style “who knows what really happened” multiple perspectives.

What we do know is that after shooting and killing the sheriff, as well as shooting another sheriff brought in to take him, Cortez went on the run. He spent the next ten days evading hundreds of people trying to capture him.

The entire plot hinges on the encounter between Cortez and the sheriff. The film handles this brilliantly, by not subtitling Cortez's Spanish. What this means, is that unless the viewer is bilingual in English and Spanish, they are as in the dark as the sheriff as to the miscommunications that doomed everyone involved.

In fact, the film never subtitles any use of Spanish by anyone, using interpreters to explain things in crucial scenes. It's a brilliant choice. It highlights how much shared language is responsible for communication, as well as showing the unreliability of translation.

Translation is a mediated experience, meaning there is something in-between the sharing of information. As anyone who has ever played the game of telephone knows, that leads to signal loss. How much varies, but in this case it was enough, combined with some very likely xenophobia, to cause the deaths of multiple people.

It's a powerful subject, and one this film handles shockingly well.

The other thing the film does is that it's one of the only Westerns I've ever seen that has as its heroic center a non-European-American. Almost all Westerns, even those with anti-heroes, are about centering the experience of Europeans.

To tell this story, with the main character, and the one we are supposed to feel for, being a Mexican-American, is revolutionary cinema. The English speakers in this film are not glorified. They also aren't demonized. They are just presented as they are.

Cortez is also not glorified, which is a bit of its own surprise, given that it's his ballad after all. It works really well, and I hope I can find other Westerns that have gone down a similar road. It's refreshing. - Jan 28th, 2020