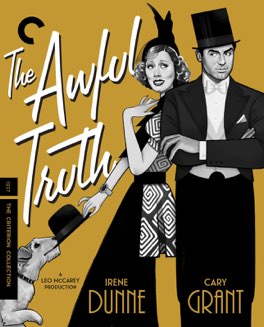 I thoroughly enjoyed this film. It has all the witty dialogue and absurd physical comedy of the other Cary Grant films I've seen recently, without the loathsome characters that made it hard to enjoy them.

After having such incredibly conflicted feelings about both His Girl Friday and The Philadelphia Story, I fully expected that I would feel similarly about this film.

After all, it's another Comedy of remarriage, just like those other two are. All three films follow a somewhat similar basic storyline. Hell, all three even star Cary Grant. Imagine my shock then, that I really enjoyed this one. It got me pondering what exactly it is that's different with this film.

The story, as I said, is more than superficially similar to those other two films. Just like them, this tells the tale of formerly married lovers whose love has soured. In this case it's Grant's Jerry, and Irene Dunne's Lucy. Both are urbane New Yorkers and have been unfaithful to each other. It's time to call it quits.

They get a divorce and almost immediately Lucy falls for an Oklahoman oil man named Dan who can't be more different from Jerry. Jerry doesn't like it, and begins to do everything in his power to sabotage the new relationship, and maybe win Lucy back along the way.

Like I said, you can squint and see the basic plot outline of The Philadelphia Story, or His Girl Friday. I would assume that all of these remarriage comedies are going to be broadly the same. What makes this one different, at least from those other two, is that the characters aren't really bad people.

Jerry and Lucy are cheaters, but that's about it. They genuinely seem to care for each other, and both of them are easily rooted for. Additionally, the match between Lucy and Dan is so clearly doomed. Dan is as far from an urbane New Yorker and it's possible to be, and in this case opposites don't really attract.

He's a rebound, something that's called out explicitly by Lucy's aunt early in the film.

Because of that, it's super easy to root for Jerry in his meddling, and to be happy every time the couple comes closer together. It also helps that there's far less sexism than those other two films. On top of that, while there isn't much diversity in this film, at least what's there is handled a million times better than in His Girl Friday.

I wonder if it comes down to the director. Leo McCarrey made one of the all time great social pictures in Make Way for Tomorrow, is it any wonder he's able to handle this with slightly more thoughtfulness and sensitivity. Actually, it's kind of amazing that he made both films in the same year. The upperclass concerns of this story could not be farther from the working class struggles of the other one.

Now that I think about it, I also really enjoy another of the remarriage films, Preston Sturges' The Palm Beach Story. That one also plays screwball tricks with appealing characters that I don't have to feel bad about rooting for.

I've often read that I need to be ok with the awfulness of the characters in the films I don't like, because that's just how these films are. Well, this one proves otherwise, and I couldn't be happier about it. - Mar 24th, 2020