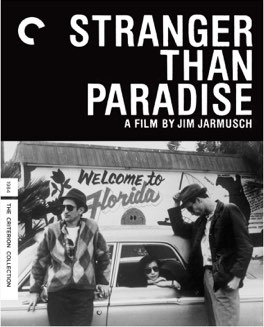 This is definitely my kind of movie. Nothing and everything happens, and the whole thing is just great.

The trouble with being sort of jaded, or detached, or cooly distanced from the world, is that the world then becomes distanced from you too. Every room you’re in becomes the same room in a sense, because you’re bringing the same you into them. The only way out is to become something new.

The characters here are not going to become something new. They are well worn into their own idiosyncratic selves. This is the story of American-Hungarian Willie, his American friend Eddie, and his Hungarian cousin Eva, traveling around and finding almost nothing. They are cool. Although their’s is a coolness defined entirely by not actually being all that cool at all. They are weird and awkward and, to be honest, kind of stupid at times.

The film is broken into three acts. The first connects Willie, a Hungarian who has totally assimilated to America, with his cousin Eva who is freshly arrived from the old country. Willie wants no part of her at first, but they bond, and it sets in motion the other two acts, which are road trips. Along for the ride is Willie’s friend Eddie, who has a crush on Eva that he never acts on in any kind of way.

The three of them are all in a malaise of some kind, and that’s mostly what their hanging around is about. Willie and Eddie are small time hustlers, cheaters at cards, gamblers, and overall ne’er-do-wells. Eva is, even at sixteen, already jaded and over it all. They travel from New York to Cleveland to Florida, but they never really get anywhere at all.

I love these characters. This are my type of people, in my type of story. I like the grimness of it all and the pointlessness. The slice of life, nothing actually happens, reality-but-not-reallyness of it. I could ride in this car, and smoke these cigarettes, and do nothing. I would have the best and worst time. - Sep 5th, 2020