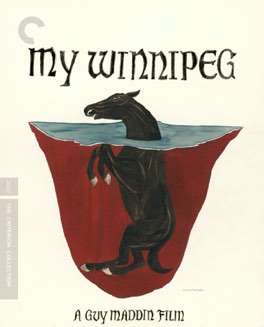 I really think Guy Maddin should have hired a professional narrator for this. On the other hand, I almost certainly still wouldn’t like it at all, so what do I know

I don’t really have a home town. When people ask me where I’m from, I usually say Seattle. That’s because when I was fifteen my family moved to Mercer Island, WA, which is adjacent to the city. I say Seattle because I went to most of high school there, and because when I went away for college my family was living there. So when, in college, people would ask where I was from, that was literally where I had come from.

Before we lived in Seattle we lived in three other cities, in two other states, on both coasts. So I’m not really “from” anywhere in particular. That is extremely different from my wife’s story. She is from one very specific place. In fact, she’s from one specific part of one specific place, where she lived for her entire pre-college life. The same is true for my Dad and my Mom. I think the same is true for most people I meet.

All of that is to say that I don’t really have a relationship with anywhere like the one Guy Maddin clearly has with Winnipeg. Over the years I’ve thought about this lack of a single connection a lot. I think that moving around so much helped me to deal with new locations. It also helped me learn to freeze friendships, and to be able to thaw them out later. On the other hand, as a child it definitely caused some social problems and gave me a wariness that was unhealthy.

Overall, I wouldn’t change it, for all the no-regrets reasons I’ve discussed recently. In fact, I’m probably going to provide a similar experience for my son. Trying new places is a good thing, and maybe it prevents the kind of spiritual malaise that Maddin describes in this film. - Oct 17th, 2020