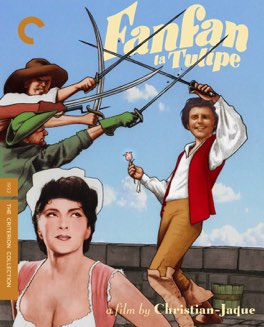 This is fun, it’s entertaining, and it’s goofy as hell. I’m good with that.

Destiny is a funny thing. Blind Chance, for example, portrayed it as something like an uncaring infinite realm of possibility. Sometimes you turn right, sometimes you turn left, sometimes it doesn’t matter which way you turn at all. This film explores a different angle; what if your destiny is made-up, but you embrace it anyway?

This is a classic swashbuckler. The titular Fanfan is an eighteenth century fuckboy who escapes a shotgun wedding to a farmer’s daughter, thanks to the prophecy of a soothsaying woman that he will marry the King’s daughter and be fabulously wealthy, if he joins the army. Upon joining, he learns that the soothsayer is actually the daughter of a military recruiter, and that her job is to say anything to gullible young men to get them to join, so that she and her father can share the money that comes with signing up new recruits.

But Fanfan is undeterred by the discovery that his destiny has been merely a cheap ruse. He decides that he’s going to make it come true anyway, and recklessly pursues that path for the rest of the movie.

Ultimately he even succeeds, more or less.

So what does it mean then? Was it in fact his destiny all along, just masquerading as a trick? Was the trick really the point after all? Aren’t we ultimately in control of our own journey? Does any of it matter? They are interesting questions, and while I won’t pretend to have any answers, it was certainly far more fun a thing to think about than I imagined I would get from this trifle of a film. - Jul 6th, 2020