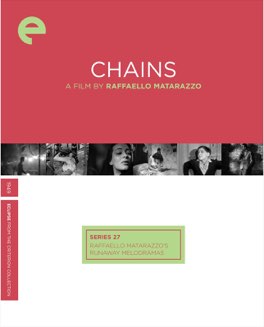 Oh wow, I hated this so much. What an absolute trash pile. This doesn’t bode well for me and Matarazzo.

There is a genre that I absolutely hate. I’m going to collectively dub it “the sacrifices of women for men". In this genre, woman are punished by the world in order to prove their love for their boyfriend, or their husband, or their father, or their children. Somehow they must suffer. Even if they are ultimately redeemed, they must suffer.

I’m going to spoil this entire story. But you really shouldn’t watch the movie, so who cares?

This is the story of Rosa, a happily married woman with two kids, living in Naples. Her life is going great until her ex-fiancé, who abandoned her years earlier, comes back into her life. Specifically, they are reunited because he’s a car thief and his accomplice uses her husband’s garage to store a stolen car for the night. This is a melodrama after all, the connections have to be ridiculous.

Anyway, he immediately decides he must have her back, even though she’s moved on with her life. He doesn’t care that she has no interest in rekindling their relationship, or that she repeatedly tells him to leave her alone. He stalks her, invents fake reasons to work with her husband, and finally tries to blackmail her into leaving her family for him. Specifically, he says he will lie to her husband and tell him that they slept together while they were engaged. Because, of course, then she will have been “damaged goods” when they got married. It’s all awful.

This leads to Rosa acting a bit suspiciously, as she tries to protect her life. Her husband concludes that she’s been cheating on him with the ex, and kills the man in a fit of rage. He flees the country, but not before making his entire family swear on the Virgin Mary to not let Rosa back into their house.

Eventually he is brought back to Italy to stand trial, and the only way for her to convince a jury that the killing was justified is if she sacrifices her honor by “admitting” to the adultery in court. This allows her to save him. And when he finds out what she has done, after not listening to her at any previous point, he finally “rescues” her, and brings her back to her life.

This should be called “Toxic Masculinity: The Movie.” Purely because of the interests and passions of the men around her, Rosa loses her family, her children, and nearly her sanity. She is completely at the mercy of her ex, because if she tells her husband the truth right away, he will lie about their previous relationship. And the husband will believe him. Because, you know, men.

She is being punished. For what? For having had a previous fiancé. Because, of course, if she hadn’t, there would be no one to come back and ruin her beautiful dutiful life as a wife and mother. Ultimately, to save her husband from a situation he brought upon himself, caused by the stalking behavior of another man who would not leave her alone, she has to perjure herself and have the entire community decide she’s a home wrecking tramp.

But no worries, her husband believes her now, after his lawyer, another man, tells him he should. Cool. - Aug 16th, 2020