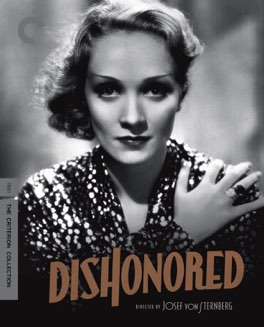 Another miss from this set. At least this time I can see some positives, that hopefully will grow as we move forward.

There are moments in this film where I think maybe I understand why people love Marlene Dietrich so much.

She gives a look and holds it, and it pierces me deeply. She says a line in a way that no other actress I can think of would have said it. She moves in a completely unique way.

These are the moments that will compel me to watch the next entry in this series, in the hopes that the quality of the film will finally match up with the talents of the woman.

I didn’t like this. At all. I don’t really understand what anyone else likes about it either. What I’ve read is that it presents an unconventional love story that “smolders” with illicit passion. I don’t get it.

The chemistry between Dietrich and Victor McLaglen is completely lacking, and he’s a terrible actor to boot. There is nothing magical at all about his performance, or their moments together.

When they do eventually fall in lust it felt unearned and hollow. The story of this film is fairly terrible, and the acting the worst sort of early sound film stiffness.

The only counter to that is the ending. It’s fairly shocking, even for today, and there’s a nice feminist angle to the whole thing.

There is one thing I noticed, that I’m not sure I’ve thought enough about before. This film is almost entirely lacking in musical score. That, combined with the relative lack of any background noise, makes for a weird experience. It’s a common feature of these early talkies, and I find it insanely distracting.

It’s odd that something like omnipresent background music, which is not true to reality, is so ingrained in movie watching for me that its absence is startling. Or maybe it’s the combination of no music and no other world sound to replace it. The film felt cackling as a result. - Dec 6th, 2019