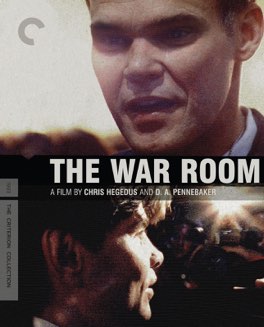 An interesting glimpse at what the inside of a political campaign looks like. Unsurprisingly, it’s not particularly glamorous, but it is fascinating.

It’s incredible how quaint this all is. All the seeds of where the American political system currently sits are present here, but in such a mild form that they seem almost nice. The basic left/right over logic divide. The nasty rhetoric. The wedge issues. The sports mentality of winning as the only goal and teams instead of ideas. The muckraking. The data. “Modern” strategy. It’s as though you took the climate of 2018 and dialed everything back to a 2 or a 3. It’s so quaint that it almost seems harmless. Almost.

This is a documentary about Bill Clinton’s successful 1992 presidential campaign. We get unprecedented-at-that-time access to the so-called campaign War Room. The War Room was a tongue-slightly-in-cheek name for the area where Clinton’s campaign brain trust met to plan. We see James Carville and George Stephenopolous, and we see Carville’s now-wife/then-girlfriend Mary Matlin, who was working for President Bush’s re-election campaign. We get semi-close-up moments with Clinton himself, and a variety of conversations indicating how campaign plans were proceeding.

As I said, the whole thing feels so naively simple that it almost feels nice. If you squint though, you can see how all the issues we are suffering from now were already here then, just not as obvious, or as strong. Especially illuminating is an early pep-talk that Carville gives, where he basically casts the Republicans as villains to the Democratic heroes. I’m reminded of an old proverb from Chris Rock: be a person, think, then decide what you believe in. The country would be a lot better off if we didn’t have this endless left/right dichotomy, if we were just people. This film is simply a witness to our current broken system, no matter what your opinion on the eventual outcome is. - Oct 3rd, 2018