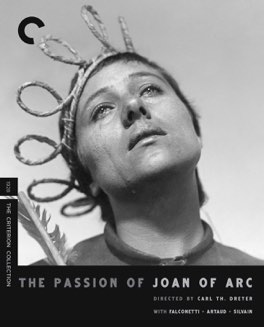 A stone cold masterpiece. I’ve mentioned before that Christian themes aren’t really for me, but I was absolutely moved by this film.

The Passion of Joan of Arc

It’s not at all a coincidence that I watched this film shortly after listening to the first two episodes of the incredibly good History on Fire podcast series about Joan of Arc. Daniele Bolelli mentions this film as the primary reason he became interested in the history of Joan, and it reminded me I’ve been meaning to watch it for quite some time. I’ve actually been on a pretty long break from silent film, and this was a wonderful way to return to that particular medium.

This film is based on the trial testimony of Joan, after she was captured by French supporters of the English crown. Apparently her entire trial, questions and answers, was carefully documented, and we still have those documents today. I’m very interested in eventually reading that trial testimony, it seems unreal to me that I could peer into the minds of people in the 1400s, today. The film’s intertitles are apparently directly taken from the trial itself. It makes for a much more compelling storyline than anything a screenwriter could likely devise.

That the film is a masterpiece is, as with so many of the films I write about here, not a huge surprise. It’s revered today as one of the best of its era, and deservedly considered to have perhaps the greatest performance of all time in its lead actress, Renée Jeanne Falconetti. What was a bigger surprise, was the differences watching the film with three different scores, and at two different frame rates, did for the experience. This is where Criterion really shines, routinely putting together these kinds of incomparable special features.

The film apparently never had a specific score that its director, Carl Theodore Dreyer preferred. With this release there were, as I mentioned, three options. The first was made in the 1980s, and it’s the default choice. It’s a great score, full of pathos and beautiful cello performances. It really feels like it was composed for this film, and I absolutely loved it. The second choice is a more modern one, made by members of Goldfrapp and Portishead. It’s not a bad score at all, but I found it a bit too modern indie rock for the film itself. It took me out of the emotion of the film.

The third choice, an all piano score by Mie Yanashita, is paired with a different frame rate than the previous two. No one knows at what frame rate the film is meant to be shown, and the two leading choices are 24 and 20 frames per second. The first two scores are meant for 24 fps. At 24 fps the action sometimes seems sped up, with people moving or talking faster than seems normal. 20 feels much more appropriate. This score is great, plaintive and moving, but I still think I prefer the 1980s Voices of Light score, which unfortunately I can only watch at 24 fps. The fact that I got to experience all these differences at all though, that was absolutely amazing. - Dec 24th, 2018