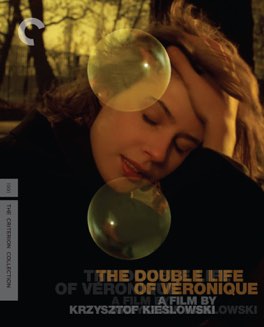 This is the fourth film by Kieślowski I’ve seen, and the fourth time I’ve fallen in love. He speaks directly to my heart in these films, and I connect with them in ways I can’t even begin to explain.

The Double Life of Véronique

Much like his Three Colors Trilogy, which I loved, this film reflects director Krzysztof Kieślowski’s desire to explore the kinds of connections between people that are usually completely ignored. As in those films, this one is “about” ordinary people just living their lives, but there is so much more going on, most of which is never directly addressed, or even all that alluded to. It’s a difficult path to take, as it could leave audiences confused and upset. Kieślowski makes it work by making the rest of the things in the film so delightful it all works, even if you don’t consider any of the deeper ideas being presented.

This film tells the story of two identical looking people. The first, a Polish woman named Weronika, is navigating her relationship with her boyfriend and her incredible singing voice, which leads to her getting a spot in a singing group in Krakow. The second, is a French woman named Véronique. She’s just quit her singing career, is teaching music at a local school, and is trying to figure out what’s next. As the film progresses she meets a man who she is inexplicably drawn to. The film doesn’t really attempt to resolve much of these threads, but rather just lets them play out a bit.

The connections between the identical Weronika and Véronique are mostly, as in Red, in the eyes of the viewer only. We know both are, or were, singers. We know both struggled with certain familial relationships, or with their love lives. We know they both exist, which they themselves are only very briefly aware of. One of the many things the film reminded me of, is an idea from theoretical physics, called Bell’s Theorem. I am not a physicist, so my understanding here might be wildly inaccurate. What I understand about the theorem is it describes the logical impossibility of a certain behavior of particles. If two identical particles are ever in contact with each other, then they will continue to influence each other, no matter what distance passes between them. This film, where the protagonists meet for only a minute, but continue to affect each other, shows the theorem in action.

I wonder about the title of the film. It’s not The Double Life of Weronika, after all. Nor does it even allude to there being two women. Perhaps that’s just because this film was made with French money, and so that was the title they thought would be more familiar to French audiences. I wonder though, because while Weronika takes the first third of the film, the rest is dedicated entirely to the life of Véronique. One could perhaps argue the film is simply about Véronique, and maybe her double life is that she once lived in Poland and had a completely different reality. It’s probably far too literal, but these kinds of thoughts will continue to linger in my brain, long after I’ve finished consciously pondering the story. - Dec 12th, 2018