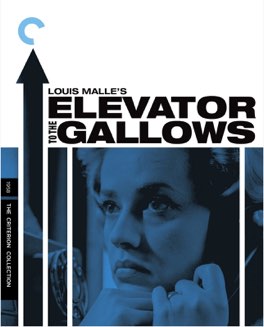 The soundtrack by Miles Davis is so utterly perfect, and as always I’m completely captivated by Jeanne Moreau. That the film itself is also great is a nice benefit.

Elevator to the Gallows

Thank goodness for the little unexpected developments that can throw even the best laid plans into chaos. Without those tiny moments where things are nudged off track, we wouldn’t have films like this one. If every heist, murder, escape, or revenge, all went off without a hitch, what a boring fictional world that would be. Of course, in real life, this sort of thing is completely maddening, but on film it all makes for great drama.

This is a fun story, ostensibly in the genre of crime thriller. A man loves a woman. That man is employed by the woman’s husband. Together with his lover, they plot to kill the husband, and run off to be free. Their plan is foolproof, but... one random decision by someone totally uninvolved changes everything. Then another does. This is the kind of film where I don’t want to go into too much detail as to the exact specifics of the plot, so I’ll just say the best laid plans often go awry, and we’re all left to proceed as best we can.

As I said, this is ostensibly a simple crime caper, albeit an extremely stylish one. There is a lot more going on though. This is a film with a subtlety of theme. There are issues of loneliness, solitude, and trust. There are issues of modernization, and the changing of generational interests. The film uses the thrilling story at its core to examine these issues. Thematically, a lot of the same sort of things Breathless would tackle two years later are already present here. So it’s a fun story, with a couple of great twists, but ultimately it’s so much more.

The way the two younger lovers are presented, in some sense as an opposite to the main pair, is so ahead of its time. There is nothing sentimental, or even smart, about them. There’s a certain romanticism to their stupidity even, as though they are simply being driven along a path they can’t see. They represent the Parisian youth of the sixties, arrived two years too early. They are Americanized, bitter, scornful of the recent wars their government has been participating in. They represent the last dying breath of the French Fourth Republic, as it prepares for its exit. - Nov 8th, 2018