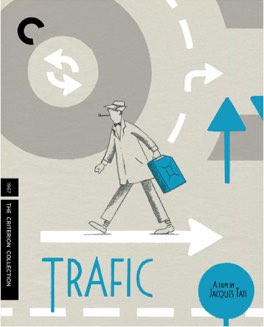 I love this film so much. It’s just so perfectly goofy, with so many expertly arranged moments. The scene where M. Hulot demonstrates the features of his camping car are the highlight, but really the whole thing is so great.

It’s exceedingly difficult to explain to anyone what exactly makes the films of Jacques Tati so funny. They either get them or they don’t, and they need to watch one to find out. Even then, they need to be unusually patient, as the humor develops in its own time. Once you get it, the entire thing becomes so wonderfully absurd. Everything begins to make sense, like pieces in an increasingly complex puzzle. Slowly, sometimes shockingly slowly, it all comes together beautifully.

I’ve seen this film called his weakest, and while I understand where those people are coming from, it seems a bit silly to me. What’s the point of rating masterpieces? Do I think this film is as good as PlayTime? No, I guess not. But that’s hardly a fair bar to hold anything up to. So, it’s not as good as one of the greatest films of all time? Cool. Tati didn’t make all that many films, and they are all so perfect that I guess it’s natural that we become nitpicky. Sustained greatness gets taken for granted eventually.

Perhaps the issue is that this film is more conventional than its predecessor. It would be hard for it to be less conventional, and still resemble anything like a coherent narrative. But here we have something straightforward, at least on the surface. We have three people, trying to get a new car, to a car show, traveling from Paris to Amsterdam. But of course it’s not that simple. The destination isn’t what matters. The journey isn’t even really what matters, they are almost never actually in motion. Instead it’s all the insanity that surrounds it.

Tati was a master of finding the ridiculousness in everything. Here it’s in our behavior while driving, fertile territory for his wisdom. People seem to utterly change when they’re behind the wheel of an automobile, and not always in predictable fashion based on their non-car personality. The film explores the theme so well, all while remaining light and goofy. It’s so wonderful, and I’m so happy I have these films to watch whenever I want. - Nov 12th, 2017