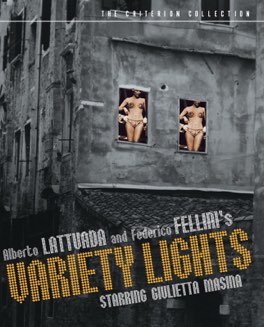 A minor work, but one I enjoyed nevertheless. It was funny, but more importantly it was endearing, which isn’t a quality I always associate with Fellini.

In my recap post for 2015 I mentioned how much I enjoyed participating in so many blogathons last year. It was a wonderful way to discover other film bloggers, and to constrain my thoughts to certain topics. I’m therefore super excited to be writing this post for my first blogathon of 2016. This one, hosted by Movies Silently and Sister Celluloid, is focused on the backstage side of the performing arts. The mission was simple, to write about any film, from any era, that prominently featured performers as a central theme of the story. I chose this, the first film from director Federico Fellini, to examine.

The main character of this film is not, objectively, a very honorable guy. He’s a schemer, he’s a liar, he’s a fraud, and he’s most definitely a womanizer. The people he associates with are also not particularly noble or honest. At best they’re naive and pathetic wannabe stars, at the worst they’re actively betraying each other for a chance at that brass ring. There is basically only one character among all of them that you should feel sorry for conventionally, and even she’s something of a mess. All of this makes it seem like this would be an unpleasant film to watch, but nothing could be further from the truth. This is a really fun and lovable film.

The film follows the story of a small-time vaudevillian troupe that travels around Italy to an uneven reception. Their acts are barely professional, but they’re extremely earnest, and they really believe they’re great. At a stop in a small town they enchant a young woman named Liliana, who dreams of becoming a star. She manages to worm her way into their company and immediately becomes the biggest draw of the show. She also captures the eye of the head of the group, Checco, who leaves his mistress and fellow performer Melina to try and make Liliana a star. The rest of the film follows his desperate attempts to achieve this goal, and to win her love.

What saves this film from being unpleasant is the love that co-directors Fellini and Alberto Lattuada so clearly have for these people. They are presented as noble failures, rather than as anything grotesque. This is the underside of society; these people are clearly losers with little to offer. But instead of demonizing them they are treated with the utmost compassion. These are people who believe they can be great, and while the film makes it pretty clear that for most of them that’s an incorrect belief, it doesn’t hit the audience over the head with it. They are allowed to simply be themselves.

Because of that obvious love I began to fall for the characters myself. I grew to appreciate and enjoy them, and was actively rooting for their various small successes. There was something oddly romantic about their rumpled struggle for the adulation they were so sure they deserved. There’s just something about lovable losers, it’s really hard not to feel for them. This is in stark contrast with my feelings about another film Fellini made full of people with unsavory behavior. In Amarcord I found the cast to be petty, unsentimental, boorish, and ultimately completely unlikable. It’s interesting to me because the characters here are actually far more conniving, full of all the vinegar of backstage politics, and yet I enjoyed them, and thus the film, far, far more. - Jan 15th, 2016