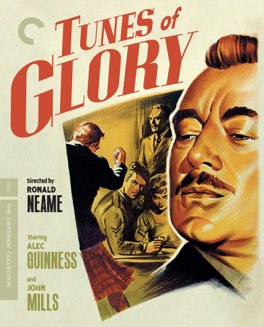 A film that is lovely in a tragic sort of way. The ending was a shock, but in retrospect it was obvious all along, a sign of truly great storytelling.

When I saw that this film features both Sir Alec Guinness and Dennis Price, the two stars of Kind Hearts and Coronets, I got excited. I loved that film for its dark humor, so full of absurd situations and ridiculous characters. What I got with this film was almost nothing like that, but in place of the ridiculous comedy I found a very interesting take on an old idea. This is a film about building things up in our minds. Building them up to the degree that the reality cannot possibly measure up. To the degree that they are forced to fall apart.

The story starts on the last night of the colonelship of Jock Sinclair, who has been acting as commander of his Scottish Highland regiment since their original leader died in the North African Campaign of WWII. During the war a change didn’t make sense, but it has recently ended, and HQ picked their peacetime replacement. That replacement, Basil Barrow arrives, and quickly demonstrates a completely different leadership style than the battalion had been familiar with. Where Sinclair is a fun loving drunk, Barrow is a taskmaster who takes rules extremely seriously. These difference naturally lead them to butt heads, and to Barrow this is an untenable position to be in. The rest of the film follows his attempts to take control of this situation, and the disastrous direction those attempts take him.

I’ve read some writing about this film that sees it as a struggle between different aspects of masculinity. I can see what they mean, at least to a point. Sinclair and Barrow are indeed very different men, each with their own claim on different kinds of a fairly toxic masculinity. I don’t see that as the message of the film however. Instead, I see it as a cautionary tale about what happens when your hopes for a situation are so high that they cannot be met by its reality. People have a tendency to build things that matter to them up in their heads, to a standard that the real world cannot possibly obtain. In this case, Barrow has been dreaming of leading this battalion since he was a small child, to follow in the footsteps of his ancestors. The reality of what he encounters shatters those dreams.

I’m as guilty of this as anyone. I’m a dreamer, someone who thinks of elaborate ways my life might play out in the future. I’m constantly putting myself in future situations. Figuring out how I think they’ll go. Plotting how I might behave. Sometimes things go better than I’ve imagined, sometimes worse. The main theme is that they are almost always different from however I imagined they would be. No matter what information I had going in, the reality of things is always unpredictable. It’s one of the most wonderful aspects of life. The danger is in letting the hopes and dreams grow so big that reality has no choice but to tear them down.

There’s something tragic about wanting something so much that your desire for it destroys your ability to have it. I think a certain detachment has to accompany our actions, a distance that allows us to accept that nothing will ever be perfect. When we get completely tied to a specific set of outcomes we have almost no chance of fulfillment. The secret here is not to stop dreaming, or to stop wanting, but rather to accept that reality will simply be different than our dreams. Not necessarily worse. Not necessarily better. Just different. The unpredictability of it all is what keeps me moving forward, eager to see what’s over the next hill. - Apr 25th, 2016